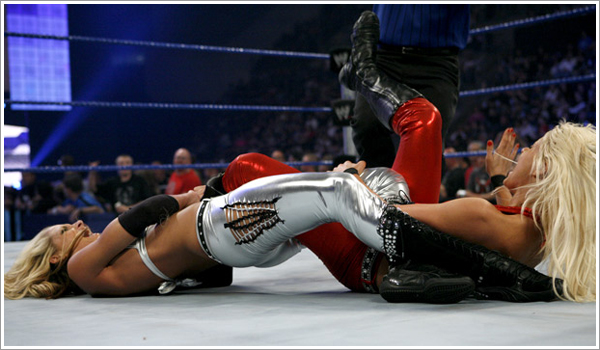 Michelle McCool‘s rise to prominence within WWE continues, as WWE takes a leap and shows faith in the SmackDown! Diva by having her represent WWE on an episode of The Best Damn Sports Show Period next week, alongside WWE Superstar John Cena. This is a big leap for Michelle, as she follows in the footsteps of Trish Stratus, Torrie Wilson and Candice Michelle to name but a few in doing promotional work for WWE. Turning up to SmackDown! tapings and pay per views is one aspect of being a top WWE star, but television interviews etc. are another – these spots are usually reserved for WWE’s top Superstars and Divas.

Teaming Michelle up with WWE’s top media spokesman, Cena shows that WWE is pushing for Michelle. It’ll be interesting to see how she handles this side of the business. And hate to state the obvious, but there is also a boundary with her thick accent. Hopefully she’s had some elouction lessons! Will Michelle be able to pull it off?