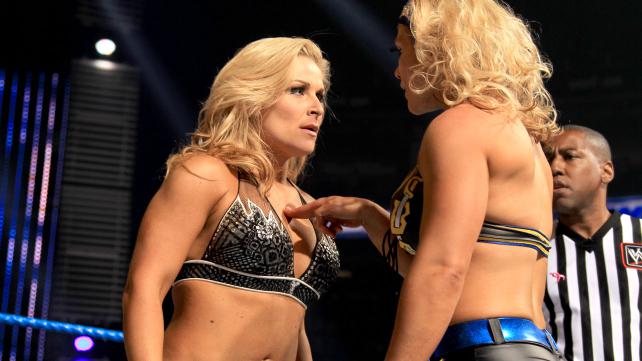 As 2012 draws to a close, the Diva Dirt writers have each picked a personal highlight to reminisce on the year gone by.

Today: Erin shares her best moment from 2012 — the first ever encounter between Beth Phoenix and Natalya on SmackDown.

It might seem strange to name a match that was only four minutes long my “Moment of the Year”, but it’s the story behind the match that makes it momentous.

The second spoilers surfaced for that episode of SmackDown, Diva fans were abuzz: Beth and Natalya were finally going one-on-one! Naturally, expectations were sky-high. Some ended up being disappointed by the match, upset about its length (or lack thereof), but I loved it for a number of reasons. Let me set the scene:

Beth Phoenix has returned from her absence, is a babyface for the first time in years and, according to rumors, is wrapping up her tenure with the WWE. She is also in her hometown of Buffalo, New York. The stars seemed to have aligned for one of those “now or never” moments, and the WWE displayed a rare sense of awareness by booking this match: Beth Phoenix vs. Natalya, the former Divas of Doom going head-to-head.

Now, if it was up to me, the match would have instigated a feud that Beth could have rode out to her retirement. Still, as a one-time thing that more or less came out of nowhere, the match was a great treat for the fans. It had personal tension: see that moment between them mid-match when Beth, haven shaken Natalya’s hand earlier, was angry about a petty shove Natalya gave. She poked Natalya’s chest and stared her down like a disappointed mother. Natalya practically cowered… That is, before she decided to slap the Glamazon in the face instead. The emotion they both showed after the match, when Beth was accused of being Kaitlyn‘s attacker, showed how deep their friendship still went, despite the hard fought match we just saw.

The match also had big moments, like when Natalya latched Beth into the Sharpshooter and Beth sold the hell out of it, twice using her unparalleled upper body strength to crawl to the ropes; or when Natalya kicked out of the Glam Slam, something few Divas have done.

It had the feel of a pay per view match without either the length or big stage. They created the feel of one all by themselves by displaying emotion and creating compelling scenarios. These days, even Divas Title matches on PPV fail to have the “big match” atmosphere, yet Beth and Natalya managed to make me feel like I was watching a PPV despite it only being a four minute match on SmackDown. It just goes to show that if they do everything they can with what they’re given (which often isn’t much) the Divas can put on compelling matches, despite how much the WWE feels like shafting them that particular week.

The match, as far as I was concerned, could have served as Beth’s retirement match. She would have gone out the winner in her hometown, garnering babyface cheers from the crowd and having finally wrestled her best friend. It would have made for a better goodbye than most Divas receive, that’s for sure.