Diva Dirt presents its annual selection of women who have been most newsworthy and talked about in 2012. The 12 women selected have embodied the zeitgeist of the year by hitting the headlines, breaking boundaries, stopping the show, and becoming trending topics. The Diva Dirt editors and contributors have picked one woman as the Diva Dirt Woman of the Year, as well as 11 runners-up who have helped define 2012. Join us as we count down our runners-up before unveiling the Woman of the Year on December 31st. 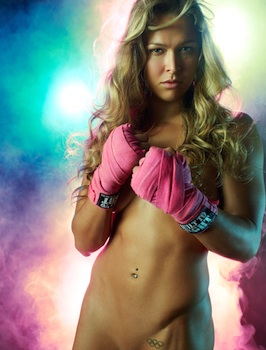 She may not be a wrestler, but in 2012, Ronda Rousey set new standards and broke new boundaries for women in all combat sports — wrestling, MMA, or otherwise — and her achievements may well be a benchmark for the future against which all other fighting females are measured.

In March, she headlined Strikeforce’s event on Showtime, defeating Miesha Tate for the Women’s Bantamweight Championship in what was perhaps the most hotly anticipated and well hyped female fight in history.

Rousey continued to make more history by becoming the first woman in history to be signed by UFC earlier this year, and is the MMA company’s first ever female champion. Not only that, it was announced that she will headline a UFC pay per view next year, putting her title on the line.

Rousey’s achievement in the cage — an impressive undefeated streak of six wins and six first round victories thanks to her dreaded armbar submission — is unprecedented, and her universal appeal as an attractive-but-kick-ass female has brought the sport of female MMA, and MMA in general, a new found attention.

Matching her looks and her fighting skills, Rousey is an enigmatic character, who, like many of the greats, certainly has a controversial, arrogant nature that only seems to amplify the show-woman that she is.

Rousey is an exciting, progressive vision of a fighting female, whose progress and continued success can only help to improve the way all women in combat sports are utilized and perceived.

Check back tomorrow for another Women of the Year post.