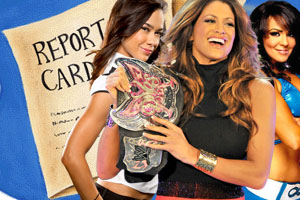 Following 12 months of title changes, backstabbing, romantic entanglements, weddings and dancing, we finally come to the end of 2012 for the WWE Divas and TNA Knockouts. And, as is annual tradition, the Diva Dirt team take a look back at the year for the women who have entertained us during the course of the year, grading them A-F in our report card.

This year, the report card comes to you in text form, but you can catch up on past report card podcasts below:

AJ Lee | Main event storylines with top WWE Superstars, becoming the most popular Diva on the roster, being General Manager of Raw, main eventing Raw… the list goes on. Needless to say, 2012 has been a fantastic year for AJ. A+

Aksana | The Diva who you may have forgotten was even there actually had a pretty eventful year — from falling for her “Teddy Bear”, to dumping him in a hot second after he lost his position of power and aligning herself with Antonio Cesaro, that was just a start. She was also unmasked as Kaitlyn‘s long sought after mystery attacker at Night of Champions. However, her matches just haven’t been up to par, so there’s plenty of work to do still. C-

Alicia Fox | Poor beloved Alicia didn’t have match to do this year and frankly, the most exciting thing about her character in 2012 was to see whether she’d be a heel or face that week. Sadly, her constant disposition changing and lack of spotlight led to an uneventful year, but her matches with Natalya on Superstars are always a treat. Having said that, we hope 2013 is better. D

Cameron | One half of the Funkadactyls, Cameron became an object of desire as she and Naomi worked their hips, their booties and everything else by Brodus Clay’s side. Cameron perhaps isn’t destined to be a great ringmaster like her cohort, but fills her role well (that arrest notwithstanding). C-

Eve Torres | You wait for a Diva to have an incredibly strong year in WWE, and two come along at the same time. Eve’s accomplishments this year include storylines with the top talent, main eventing Raw, becoming Divas Championship, competing at WrestleMania, and becoming our favorite bad girl. What a year! A

Kaitlyn | The former NXT winner made improvements in the ring and in the latter half of the year, moved to the forefront of the Divas division with multiple pay per view matches and a Divas Title feud with Eve. 2013 looks like it will be her biggest year yet. C+

Layla | Coming back after nearly a year away due to injury, winning the Divas Title and fending off competition from the likes of Beth Phoenix and more, Layla certainly had a strong year. One could forgive her if she wasn’t 100% in the ring, but Layla improved with a new vigor and seemed to have improved in the ring, too. B+

Naomi | The dancing Diva burst on to the scene as one of Brodus Clay’s Funkadactyls, though fans of the former NXT runner-up have always known she’s capable of a lot more. Thankfully, and in something of a Christmas miracle, she got to show just what she could do before the year was out. Naomi impressed against Eve at WWE TLC and fingers crossed, may receive more matches in 2013. C

Natalya | As much as it pains us, like Alicia Fox, 2012 just wasn’t Natalya’s year storyline-wise. While never center stage, Natalya is certainly the strongest hand in the Divas division and can always be counted on to give a great performance, including some great Superstars matches. We hope 2013 brings more, however. C-

Rosa Mendes | Rosa finally found the role for her, guiding Epico and Primo to Tag Team Championship glory, but other than that, Eve doesn’t need to worry about her Divas Title around this Diva. D

Tamina Snuka | Tamina Snuka wasn’t in the spotlight year-round, but when she was, she certainly knew how to make a splash — no pun intended. From her rivalry with Beth Phoenix earlier in the year, including a great Diva Title match at Elimination Chamber, to taking out AJ Lee at Survivor Series, Tamina is certainly a wildcard to watch out for. C

Vickie Guerrero | Oh, Vickie, Vickie, Vickie. Is there really anything to say about Vickie that hasn’t been said already? She’s the perfect antagonist and hopefully with the rise of AJ and Eve, she’ll soon have some more Divas to duke it out with on the upper tier of WWE. A

How would you grade each of the Divas? Tell us your grades in the comments!