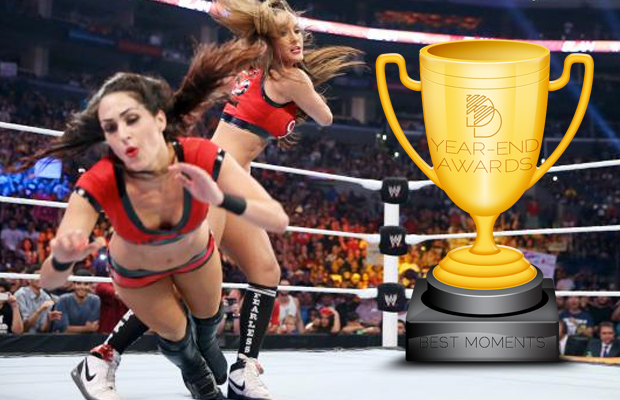 For me, the first inklings of a Nikki Bella heel turn were planted when Brie Bella started earning main event status. As twins, they come as a pair and I felt that one without the other wouldn’t shine quite so bright. Brie went on to challenge the Queen of Everything, Stephanie McMahon, at SummerSlam but it was Nikki that had people talking at the back end of this feud, and it was Nikki that claimed the Divas Championship and brought it somewhere it belonged.

I feel like we all saw it coming, with the constant pressures of handicap matches left and right, and Stephanie consistently reminding Nikki that she only had Brie to blame for her misery. There was only one way for Nikki to go, and that was up.

The moment she stepped into the ring at SummerSlam, and helped her sister corner the billion dollar princess, I knew something was up. Sure enough, Nikki delivered one of the best right hands EVER, and cost her sister the sweet revenge that Brie had been courting against the Authority, after all they’d done to her husband, Daniel Bryan.

But Nikki had only herself to think of; after her sister walked out on WWE in favour of her husband’s career, Nikki had no choice but to fend for herself and, time and again, fight in unfair stipulations. She was embarrassed repeatedly, and enough was enough.

The storyline that followed the oh-so amazing right hand to the jaw was a little lackluster; the feud fizzled out a bit and, eventually, people stopped caring as much. While the circumstances didn’t give us one for the ages, it certainly gave us one to watch.

Nikki will be a force to be reckoned with come 2015. Mark my words.