Best Moments from 2014: Lita is Inducted into the WWE Hall of Fame 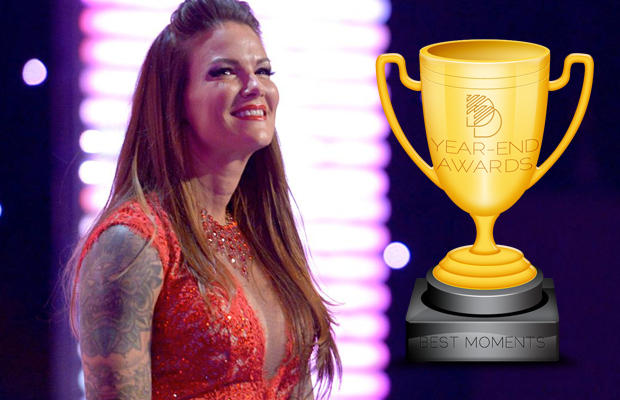 Erin’s Pick: Lita is inducted into the WWE Hall of Fame

Lita wasn’t my first favorite Diva, but she was the first one I considered a hero. With the way she flew around the ring, doing things you never saw Divas do and dressing like no other Diva, it was no wonder that she earned my adulation. My admiration of her only grew as her myth did, through Women’s Title reigns and countless memorable moments.

Somewhere along the line, right about the time of her heel turn, the magic surrounding Lita dwindled. This was of no fault to her: she was playing with the hand she was given. It was a terrible hand, though, turning the beloved daredevil into a demonized cliche. It didn’t help that the WWE gleefully blurred the lines of fiction and reality, inviting fans to cast insults on the woman herself and fault her for doing her job too well.

Similarly, her exit from the WWE was disgraceful. Her career came to a close not with tearful speeches or a standing ovation, but in a shameful “ho sale” that reinforced the insulting narrative forced upon her in the closing years of her WWE tenure.

In the years that have followed, the WWE has made small moves to restore Lita’s legacy, giving her a fun appearance on Raw’s 1000th episode and an impromptu reunion with Trish Stratus at Raw’s 15th anniversary. However, the most meaningful gesture wouldn’t come until April of this year, when Lita was inducted into the WWE Hall of Fame.

Lita was a natural choice for the Class of 2014, entering on the heels of Trish Stratus, the yin to her yang. Trish even introduced her enemy-turned-ally-turned-enemy-turned-ally, delivering a heartwarming speech that reminded fans of the Diva they fell in love with.

Then came Lita’s moment. Her speech, casual and filled with personal anecdotes, gave fans a true sense of where she came from, who she was and what was important to her. Gone was the woman that was ushered out of the WWE in disgrace, replaced with a larger than life legend whose humble beginnings and barrier-busting made her a Diva like no other. The Lita of old was back. And, as it turns out, she was remarkably similar to Amy Dumas, a woman whose personality and fire is still unmatched in the more than eight years since her departure.

To me, Lita’s Hall of Fame induction signified the restoration of her legacy. She has been placed forevermore alongside the true greats, one of the few women to receive the honor. It’s confirmation that the contributions she made to wrestling were significant, unshakable and ultimately untarnished by her career’s closing moments. Finally, fittingly, Lita had received the farewell she so richly deserved.