Best Moments from 2014: Paige Debuts and Wins the Divas Championship 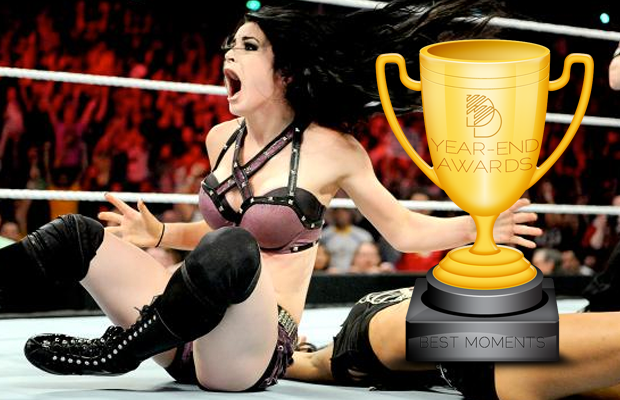 Yes, yes, I picked a moment that I’m sure tops quite a few Diva fans’ lists this year, but I can’t help it. My personal favorite moment of the past twelve months happened on April 7th, 2014… the night Paige finally made her main roster debut, and not only that, but captured the WWE Divas Championship.

NXT fans had been asking #WhereTheFuckIsPaige for months upon years. We wanted her on the main roster, and we were sick of waiting for her. On the fateful night of April 7th, WWE not only listened to our pleas, but decided to show us that the waiting game was 100% worth it.

As AJ Lee stood inside the ring one night after defending her title against every Diva at WrestleMania 30, she vowed to be the greatest Diva of all time and claimed there was no competition to take her down. Suddenly, the magical, beautiful rock anthem made possible by CFO$ hit and out walked the NXT Women’s Champion in all her glory. With a crowd firmly on her side from the get go, Paige tried to make everyone believe she was merely out there to congratulate AJ. But the ever so cunning British Bombshell knew deep down that AJ wouldn’t have any of this. Little did she expect though, that AJ would feel so disrespected she would challenge Paige to an impromptu fight with her coveted Divas Title on the line.

It was her first night in the company, and it was the night she swept Lee off her feet with The Paige Turner, hooked the leg, and secured a spot in history as the first person to ever win the WWE Divas Championship on their debut. The crowd was electric, cheering Paige on like they had each just won 50 million dollars in a state lottery.

Honestly, it was one of those moments you feel justification in. The Divas Division, more times than not, is booked pretty poorly. Yet fans of those women continue watching to get moments like this. They don’t come as often as we would like, but in a way that makes them all the more special. Seeing someone like Paige, whom I think of as a modern day Victoria in terms of how skilled she is and how vocal (whether in a serious or comedic role) she can be in the ring, work so hard for over two years in developmental… not only finally get that call up, but also take the Divas Championship and end the longest reign in history… surreal.

Since then, Paige has went on to do a lot, but part of why this moment is the one I’ve chosen is because, in my opinion, it represents so much. You can literally see the emotion on her face and hear her voice starting to crack every time she spoke. You can tell how much that meant to her, and to know it’s something that actually happened (and not something that was pitched, then scrapped and we hear about it/get disappointed over in a shoot interview down the line) is my favorite thing in the world. She deserved it so much, and she deserves a ton of success to come her way. She may not always be in the spotlight, but Paige is the epitome of someone who never gets complacent. She puts everything she has into her matches and makes them all seem special, and for that, it’s why her debut will forever be my top moment of 2014.

Annnnd because it wouldn’t be me without making a lengthy list of runners up, I present the following moments that also made my 2014 one to remember: