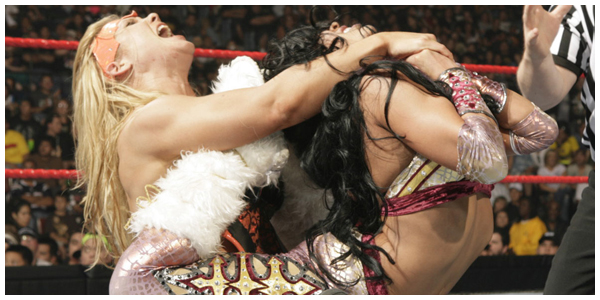 WWE Magazine has named the Beth Phoenix vs Melina ‘I Quit’ Match at One Night Stand 2008 as an ‘Extremely Underrated’ match in the May 2010 issue. The feature looks at some of the stipulation matches that have perhaps been overlooked by WWE fans. An unnamed Diva Dirt reader emailed the following:

In the May edition of WWE Magazine, they have a section called Extremely Underrated where they show matches that were extreme but may have gone under the radar. The match every diva fan loves, the I Quit Match between Melina and Beth is shown. I found it cool that people actually see how good this match really was, it was in the same category as the Elimination Chamber where Edge cashed in on Cena! They describe them with words such as “two female warriors forewent the usual weapons…in favour of punishing submissions holds and brute strength. Watch it. You will not believe the shapes you can bend a person into.”

I’ve said it many a time but I’ll say it again, this match for me was a perfect example of what women’s wrestling could be in the WWE. You don’t need hardcore elements like last night’s match to have a great match, you can stand out and have an amazing match just by being technical and using mat skills. This is a match that Beth and Melina should be extremely proud of.