Beth Phoenix Credits Molly Holly with Getting Her to the WWE 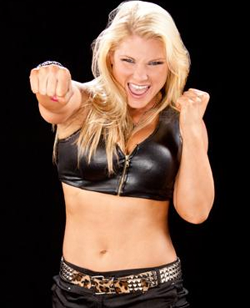 Earlier we linked to the latest episode of Colt Cabana’s Art of Wrestling podcast featuring Beth Phoenix. In that interview, Beth detailed how she got into wrestling, revealing the role that former WWE Diva Molly Holly played in getting her to the WWE, saying, “[Molly] is probably one of the biggest reasons that I’m working with the WWE right now.”

Beth explained that, while with the indy promotion APW, she took part in a signing at that year’s WrestleMania Fan Axxess event in Toronto. There, she gave Molly a match tape (coincidentally, with soon-to-be fellow Diva Gail Kim), which Molly passed on to trainer Dr. Tom Prichard. Seven months later Beth, Gail and current TNA Knockout Traci Brooks got the call to attend a SmackDown taping and take part in tryout matches. Gail was the only one to get a contract at the time, but eventually Molly encouraged Beth to head to OVW and train. Just out of college, Beth couldn’t really afford to make the full OVW tuition payments, and found that when she went to make her first payment that someone had already made it for her. Beth eventually discovered that Molly covered almost half of her OVW tuition, which Molly said was her way of paying forward the opportunities that others had given her when she had started out. Since Molly wouldn’t accept repayment, Beth would eventually put together a photo album chronicling her journey to the WWE and sent it to her, letting Molly know that it was because of her that her dream came true.

We’ve always heard great things about Molly, but something like this is almost unheard of in the world of pro wrestling. This is really a touching example of her generosity and it makes total sense that ring veterans like Dean Malenko say that she might be “too good for the business”. If there were more people like her in pro wrestling, I wonder how many more Beth Phoenixes we would be seeing in the WWE today?

Hear the story for yourself and listen to the rest of the Art of Wrestling podcast by clicking here.