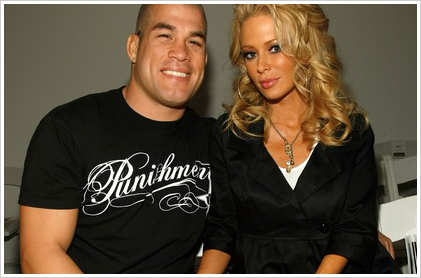 “Tito is finishing up his UFC contract this weekend. What does he do next? Wear out his name in MMA, or capitalize on his love for pro wrestling and exploit his larger than life personality by joining WWE or TNA? And remember, where Tito goes, so goes Jenna Jameson, the best self-promoter in show business today. Forget these short term deals with Pac Man Jones and Floyd Mayweather. Tito and Jenna can be long term stars who command attention, and they can bring that attention to whatever wrestling promotion is smart enough to TAP into their controversial relationship.”

Ortiz briefly negotiated with the WWE in the past, but that obviously fell through, so will this time be any different? More importantly, does anyone care? He’s pretty much a clone of John Cena and Randy Orton’s lovechild with .0000001% of their charisma and talent. Sure, he’s got name value, but so did Flloyd Mayweather and that didn’t exactly light a fire under the ratings. My focus, though, is on Jenna. I mean, wouldn’t it be absolutely groundbreaking for the WWE to hire a blonde, tanned, big-boobed chick with no distinguishable talent?? I’m shaking with anticipation!