Bound for Glory in Review: Sky’s the Limit for Velvet 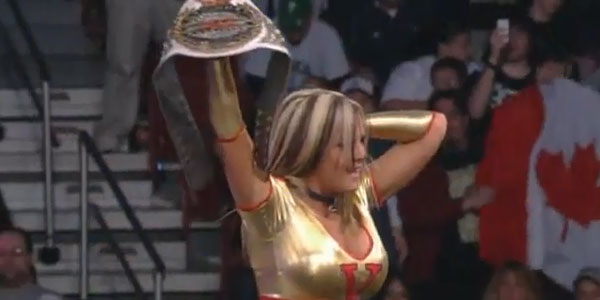 Welcome everybody to the Bound for Glory review! It is I, Bobby, your normal bringer of FCW and NXT greatness here to recap what happened at the pay-per-view. On top of the scheduled fatal four-way for the Knockouts Championship between Mickie James, Velvet Sky, Madison Rayne, and reigning champion, Winter (along with Angelina Love in her corner), we also had a tag match featuring the managerial services of Sarita, Rosita, and new Knockout Toxine (Christina Von Eerie).

For the full scoop, head on down below!

We first head backstage where Traci Brooks can be seen taking a picture with Miss Karen‘s children. (Yes, Madison Rayne is rubbing off on me with the Miss Karen ordeal.) Traci makes sure that the picture came out well, as Miss Karen enters the room with a look that, if could kill, would see everyone imaginable pushing up daisies. Nonetheless, our Knockouts VP puts on a smiling face with her children present, as she sends the little kiddies out of the room to have a grown up conversation with Aunt Traci.

Traci attempts to pass a compliment to the children, but Miss Karen cuts her off and warns her to never go near her kids again. She questions why Traci has not listened to her to put those things on her chest away, citing that they don’t need to confuse Kody anymore than he already is. She tells Aunt Traci that she has a little surprise, in that she has brought something special to wear on this huge night. Miss Karen then steps to the side of the room and reaches into the closet to pull out a skimpy referee uniform.

Aunt Traci asks if Miss Karen is kidding herself, as the VP questions if Traci thought she was going to let those four prostitutes run around the ring unsupervised! Traci demands Karen let the girls have a normal ref, but Miss Karen claims that she’s the best damn referee for this match. She warns Brooks that she is to not come near the ring unless Miss Karen is in harm’s way. She makes sure Traci understands her clearly, before beckoning Jeremy Borash to follow her and help her get ready.

Up next, we have the big Knockouts fatal four-way match to determine who will leave Philadelphia with the title around their waist! Mike Tenay and Tazz run down a tale of the tape to hype the match up, as Velvet Sky then makes her way out to the ring to a pretty large reaction! Next we have the Killlllerrrrr Queeennnnnn, Madison Rayne, sporting a camouflage get up to show her support to the armed forces. With her patented wave shining brightly during her entrance, she makes her way into the ring next to her arch rival, Velvet Sky. “HAAARDCORREEEEE COUNTRYYYYYY” blares across the speaker system, as Gangster MJ makes her way to the ring. Rocking our worlds with a thrillbilly sound indeed! Just then, the chimes of the devilish, haunting “Hands of the Wicked” plays, as Angelina Love and Winter make their way to the ring, Knockouts Title in tact. Once Winter climbs into the ring, our special guest referee, MISS KAREN, makes her way out. She flaunts to the fans, as Madison Rayne meets her half way with a hug, followed by handing off her trademarked tiara to our referee.

Miss Karen holds the Knockouts Title upside down, but that’s fine because, well, after all it is Karen Jarrett and she can do no wrong. Winter and Mickie start things off as they lock up and Mickie rolls Winter up. Miss Karen chooses not to count though, and Winter takes control with an armbar. Miss Karen begins slowly counting, as Mickie reels in pain. MJ with a cartwheel — one armed, mind you — but Winter slams her down to the mat. Madison screams for the two legal women to not hurt Miss Karen, as Winter slams Mickie into the corner repeatedly.

Mickie fights back, hitting a Mick-A-Rana, followed up with a neckbreaker! Winter slides out of the ring and tries to fend away the two crowd-pleasing women, as Madison Rayne steps up and shoos her hand in Mickie’s face. Mickie takes control and sends Madison into the ropes, but Rayne slams her down by the hair and takes a bow to large boos. Mickie then erupts with a Thesz press out of nowhere, followed by an assortment of punches. She goes after Madison in the ropes, but Rayne elbows her in the face and tosses her outside the ring.

Velvet steps into the ring behind Madison and takes control with a couple of jaw breakers, followed up with a bulldog! She hooks the leg, but Miss Karen notices that her shoe is untied… Madison slams Velvet down and Miss Karen runs over to count, but Winter breaks the pin up. Winter and Madison begin arguing, but Miss Karen directs them to tag Mickie and Velvet in so they can fight one another. They do as she orders, as Velvet and Mickie shake hands and look to put on a competitive match.

They lock up as Velvet rolls her up to… no count by Miss Karen. Mickie with a jack-knife cover, but again, to no avail. Miss Karen laughs at the two, as they again lock up, and Mickie takes control with a head lock. Velvet sends Mickie into the ropes, but Mickie with a shoulder tackle. She runs off the ropes, and Velvet slides over to trip her up, only James cartwheels out and lands a beautiful snap mare. She runs forward with a dropkick to the face, before slapping Madison off the ring apron for good measure. Velvet then takes control with chops and kicks. Velvet goes to shoot Mickie off into the ropes, but Mickie reverses. Velvet comes back with a multiple revolution headscissors takedown that sends Mickie down.

Velvet takes Winter off the apron, as she and Mickie then exchange punches inside the ring. They get the crowd riled up, as both women go to run along the ropes. Winter and Madison each pull a member to the outside after tripping them up, as all four now return to the ring. Mickie and Velvet go crazy on Winter and Velvet, as Miss Karen threatens to throw Mickie’s ass out. Winter throws Velvet outside the ring, as Mickie does the same to Madison. Winter then goes for her Catatonic backbreaker, but Mickie reverses out of it and sends Winter to the corner.

Mickie gangs up on Winter in the corner, as Miss Karen tries to break her up. Out of nowhere, Angelina Love slides Winter something that she then proceeds to put into her mouth. Mickie returns her focus to the scary champion, and Winter looks to spray her bloody mist into MJ’s eyes for a third time… but mama taught Mickie well and she ducks out of the way. instead the mist nails MISS KAREN! Miss Karen rolls around in pain, as what I can only assume to be tears fall from Madison Rayne’s eyes as she looks on in horror. Mickie James capitalizes and drills the champion with her patented Mickie-DT, but with no referee, there is no victory.

Aunt Traci then runs out to the ring, now that Miss Karen is in harm’s way. Madison Rayne throws Mickie outside the ring and drags Velvet inside. Velvet stops whatever Rayne had planned and drops her with a sick double under-hook facebuster! Hook of the leg beckons Aunt Traci to count…

Velvet Sky is the new TNA Knockouts Champion! The two ladies celebrate inside the ring as Winter and Angelina look on in horror at what has transpired… and well, Miss Karen can’t even look at anything. Madison Rayne aids the Knockouts VP out of the ring, as Velvet ushers in the Era of Sky and celebrates in front of the live crowd with Traci.

Thoughts: What a night! A lot transpired involving the females in TNA, but to focus on the match, I thought it was fun. The addition of Karen kinda stopped a lot of high risk maneuvers from happening, but there was a large story told, and it helped the crowd to get even more behind Mickie and Velvet. I thought they built to Velvet’s win perfectly with Traci running down to crown her the champion, because in a sense it would have been kinda odd to see Mickie celebrate with her after being in the match herself. TNA does seem to be getting better with their Knockouts, and I just hope Velvet Sky has a lengthy reign because she deserves it.

Also at Bound for Glory…

As Ink Inc. and Mexican America do battle for the TNA World Tag Team Titles, all hell broke loose with the men outside the ring. Sarita and Rosita then step into the squared circle, as the duo look to have something up their sleeve. They run off the ropes, but out of nowhere, new Knockout, Toxine DRILLS Rosita with a sick spear. Sarita spins Toxine around and goes for a fist, but the mohawked beauty ducks and drills Sarita with a headbutt. Toxine then proceeds to rip Sarita’s mask off, as she then hits a backbreaker/facebuster combination! Anarquia steps into the ring, but Toxine rakes him along the eyes and pantses him, leading to Ink Inc. taking control, only for Mexican America to emerge victorious in the end.

What did you think of the Knockouts action at Bound for Glory?