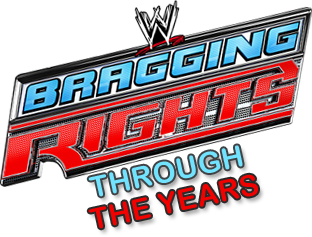 Before there was Bragging Rights, the late-October pay per view spot once belonged to a pay per view known as Taboo Tuesday, which later became Cyber Sunday. So before the Raw and SmackDown Divas wage war on each other tonight, let’s take a look back at some of those past pay per views:

In 2004, the Raw brand introduced an interactive concept that allowed WWE viewers to vote for stipulations for each of the matches. Women’s Champion, Trish Stratus defended her title in a battle royal against Molly Holly, Stacy Keibler, Victoria, Jazz, Gail Kim and Nidia. The stipulation, as voted for by the fans, was for the Divas to wear school girl outfits.

The battle royal returned in 2005 for a second year and once again, Women’s Champion Trish defended her gold. But this time it was against Ashley, Mickie James, Maria, Victoria and Candice Michelle. Talent pool severely down from last year, no? The fans voted for the Divas to compete in lingerie.

After two years of Taboo Tuesday, it was all change in 2006. The pay per view had now become Cyber Sunday and the Diva who had dominated the previous two years of the PPV, Trish Stratus had retired a month before Cyber Sunday 2006. Her vacated Women’s Championship was put on the line in an 8-Diva tournament which ended at this pay per view. Lita and Mickie James would compete in the finals of the tournament to crown a new Women’s Champion. The fans had voted for this one to be a Divas lumberjack match.

Things went downhill in 2007 with the launch of the Halloween Costume Contest as opposed to a real match. The Divas dressed up and the fans voted who they thought looked best… well actually, it usually ended up as a popularity contest.

So after the ‘success’ of the 2007 costume contest, it returned in 2008! Mickie won once again. No footage found.

So which was your favourite moment from Taboo Tuesday/Cyber Sunday?