Candice Caught in a Lie 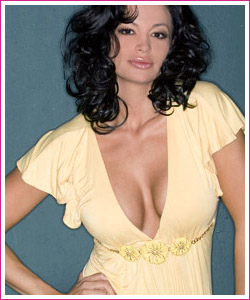 Looks like Candice has not only adopted the dearly departed, Ashley Massaro‘s injury-prone ways but her lying ways too. Last week, Can-Can herself said in an interview that her WWE contract expires in October 2009 and now just a week later, she’s backpedaling!

[My goal is to] win that championship, baby! Timeâ€™s running out! My contract expires in October of â€˜09 so weâ€™ll see where Iâ€™m at in that point in time. I mean, I would love to get into acting and do some more modeling. Weâ€™ll see, I love where Iâ€™m at right now. WWE is home to me and I canâ€™t take it for granted.

However, in her new WWE Universe blog she writes:

Also, people have asked me if I’m leaving the wwe or that my contract is expiring in Oct. 2009, well this is so FALSE!!! First off my contract is not expiring this year and most importantly I have NO desire to leave WWE! I am still focused and gearing up for another return! I have asked myself and prayed alot on why I have taken a back seat with another injury?! What I do know is what it feels like to be on the mountain top, and i know what the valley is like all to well, but i have news for all the Haters who have all these crazy reasons on why they think they know me and why my career at WWE is over…I am not unpacking my bags down in this valley but climbing out of it, even with one foot!lol! I have had a taste of the top so I know that the fight is worth it! I can preach and say x,y and z. However, this time ill just show you! I’m not too frail, injury prone, too old, nor have i lost my passion! Misfortune happens and that’s what makes me stronger and builds resiliency! So just know that weather you respect me, hate me, judge me, spread false accusations about me, this is my journey and I say when its over so hear me loud and clear I’m saying “ITS NOT OVER!!”

Admist all the spiritual mumbo-jumbo, Candice calls out the ‘haters’ who spread such rumours about her — but girl, you said it yourself. I don’t get it. Either Candice is partying with Amy Winehouse in La-La Land and can’t keep track of what she did last week or she needs to hire Chris Brown’s publicist for some damage control.

And as for the injuries, for someone so ‘spiritual’, I’m surprised Candice has yet to visit a faith healer. “Oh Lawd, it’s a miracle!”