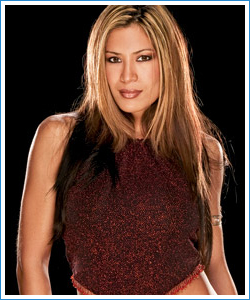 While Melina really came to prominence when she moved over to Raw, the three time Women’s Champion made her start on SmackDown. In fact, you could say that Melina was the first real star in the women’s division that was born and bred on the blue brand much like John Cena.

Arriving shortly after WrestleMania 21, Melina debuted as part of MNM with John Morrison, then known as Johnny Nitro and Joey Mercury. The trio electrified the tag team division, capturing the Tag Team Championships on several occasions.

Melina also helped reignite the Divas action on SmackDown, in feuds with Torrie Wilson and Michelle McCool. Though her stay was short, it was utterly memorable.

Since leaving SmackDown in the summer of 2006, Melina has gone onto become a three time Women’s Champion on Raw.

Check back tomorrow for #3