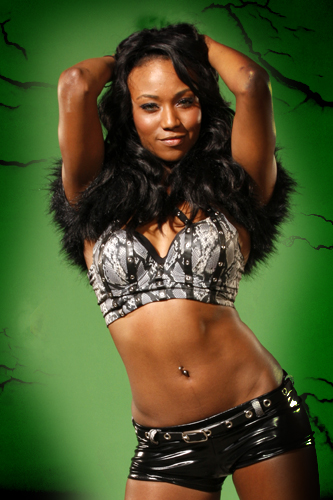 It appears that Crawford, the younger sister of WWE Diva Alicia Fox, was released last week along with fellow WWE Tough Enough contestant, Ivelisse Velez (Sofia Cortez), who confirmed her release over the weekend.

Speculation regarding Crawford’s WWE status has been rampant this week after a revamped FCW website, now rebranded NXT Wrestling, failed to list her in the Divas section of the roster. Diva Dirt today confirmed that Crawford has indeed been let go.

Crawford was signed by WWE in the summer of 2010. She, along with Andy Leavine (aka Kevin Hackman in FCW), were allowed a release from their developmental deals in order to pursue a spot on USA Network’s revival of WWE Tough Enough in early 2011. Both appeared on the show with Leavine going on to win the season. Crawford was the last female competitor standing on the show, outlasting Velez, current WWE Diva Cameron (Ariane Andrew), Rima Fakih and Michelle Deighton.

After the show ended, Crawford was re-signed by WWE and had been training and appearing in FCW since, appearing as both a wrestler and ring announcer.

Crawford recently appeared on the rebranded version of NXT, now a WWE developmental show, as a ring announcer on the first episode and as an in-ring competitor on last week’s episode.

The younger sister of former WWE Divas Champ, Alicia Fox, was the reigning FCW Divas Champion at the time of her release. Based on the promotion rebranding itself as NXT, it looks like the company will not be acknowledging the preexisting FCW championships, rather creating new ones.

Last year, Crawford talked to us about her initial WWE signing in 2010, giving up her contract to appear on Tough Enough, her sister Alicia and more.