Could Mickie James Have Debuted with CM Punk? 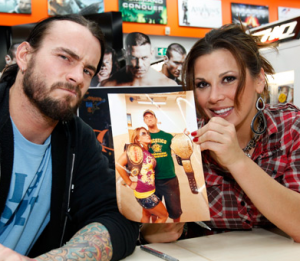 From Nexus to Paul Heyman to Serena Deeb, CM Punk has had a whole host of affiliations over the years. But before all of those had taken place, could he have been called up with a certain ‘Hardcore Country’ Diva?

It appears that alliance nearly happened, according to Mickie James herself, speaking exclusively to Diva Dirt.

The decorated eight-time champion said of the proposed pairing: “I was supposed to debut a few times and I even debuted with Punk on Sunday Night Heat and we came back through the curtain and they [WWE] were like, ‘Uh-uh, we don’t see you two together at all’, and they pulled the match.

“I wonder how my career would have been different had I debuted in one of those different storylines.”

However, the TNA Knockout, who recently returned to action following surgery, said that she is so blessed to have finally debuted in the way she did, in a storyline with Trish Stratus.

“I was honored to work with her several times. I pretty much gained my recognition off of the storyline with her and it really built my career, the beginning of my career, who I was and my identity.

“It was cool because I was like, ‘Wow, I’m showing Trish how to do this cool counter’ or something that she had never seen before and she’s telling me ‘Don’t look at that camera, look at this camera’, and then I had no clue and I’m like a deer in headlights going ‘Which one? I only see the big one!’

“She taught me a lot and it was a cool introduction and I couldn’t have asked for a better one.”

Since returning to action, Mickie James became the number one contender to the TNA Knockouts Champion, Tara, and although she didn’t gain the gold at Final Resolution, judging by her words on last week’s Impact Wrestling, things are far from over.

You can listen to our entire interview with Mickie here.