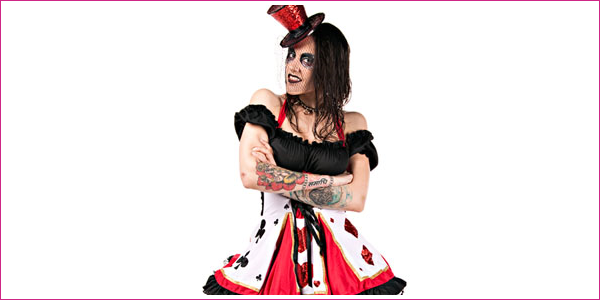 Most would agree that Daffney‘s barbed wire fall at Bound for Glory was one of the most unforgettable Knockout moments of 2009, but don’t expect to see much more of that in the near future. While Dr. Stevie’s “most precious patient” loves taking those crazy risks, she tells IGN UK that TNA is likely putting a stop to them:

“Yeah, we don’t do that anymore. I don’t like to fall down and go boom, and hit my head. We did that for a while. A little craziness. Some fun with some tack-ery. A little pin-cushion action on the back. Yeah, I’m not indestructible. So we decided that we’re not going to be doing that too much anymore.”

Which is totally smart, given how delicate the human head can be. I believe she can still be that crazy, hardcore Knockout without putting herself at serious risk–showing it through her character could be more than enough. As for getting physical in the ring, it seems like TNA is holding back on that a bit too, much to Daffney’s lament:

“I don’t wrestle that much [any] more. It kind of sucks and I hate it”…”But yeah, I would like to fight more. I totally would. I mean I really did fall down and hit my head pretty hard”…”So maybe that’s why, as of late – since that happened – they’ve been more focused on me hanging out and not wrestling because they really wanted to protect my head.”

While we at Diva Dirt have loved seeing Daffney come so far in the ring, we agree that it’s best not to aggravate that injury. If in the future she can go full-blast again, cool, but as for now, I think her Harley Quinn-esque gimmick with Dr. Stevie is more than enough to entertain us. What about you, readers–do you agree?