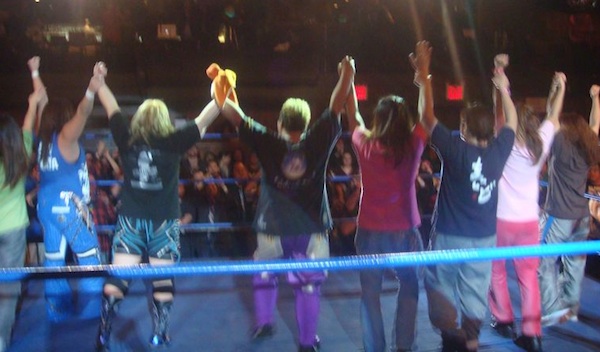 We now have a second report from last night’s JoshiMania Night 3 event in Manhattan, NY, as well as over 100 photos.

Overall, the weekend has to be considered a smashing success. Absolutely great shows and well worth going out of your way to get the DVD”s of. Speaking of DVDs, Smark Mark video announced tonight that the DVDs will go on sale in 48 hours, which means by Wednesday morning. Typically, most CHIKARA shows take 2 weeks or so, so this is really fast. I can’t say enough how much I enjoyed each show. It was something truly special and for anyone who is down on women’s wrestling because of the way its portrayed in TNA and WWE, I urge you to check these shows out. Such a great collection of talent.

Throwback vs Los Ice Creams was the opener and had the surprise of a replacement member of the Throwbacks since Sugar Dunkerton was MIA. In his place, we had the debuting Saturyne who is no one I have heard of. She wore a blue, pink, and purple outfit and a mask similar to Jamilla Craft. Some comedy here with the usual Ice Cream shenanigans. Poor Saturyne got beat up most of the match. However, she should a lot of fire and energy and I am really dying to know more about her. Good opener.

Gami vs Portia Perez was next and another solid match. Since Portia is everyone’s favorite heel, Gami was the defacto babyface in this match. Although, she too heeled it up during the match including slapping the ref on multiple occasion while being put in a submission hold. Portia must have been hungry, because she was biting the hand of Gami a lot in this match.

Next women’s match was Cherry & the Colony vs Uematsu and the Batari. Uematsu was in full green Batari facepaint here which was awesome. She really fit in well with her male teammates which in itself is a little scary. Really fun match here which saw Cherry and two of the colony do the running dropkick into the corner spot the colony usually do in their matches. Sadly, Cherry did not have any matching attire with the Colony in this one.

After intermission, we had Yoneyama vs Ozaki in a really good match. As you would imagine, Ozaki cheated… a lot. Yoneyama was her typically energetic self and is easily one of the most popular Joshi stars this weekend.

Next up was match of the night by far. 6 woman tag with Toyota/Shimono/Nakamori vs Kong/Shirai/Kuragaki. This match lasted nearly 30 mins and every single second of it was gold. Possibly the best match in a CHIKARA ring this year. Match even had the crowd chanting “THIS IS AWESOME” and “PLEASE COME BACK”. Kong brought her metal container, but never used it unlike in Night 1. Kong and Toyota teased starting the match off until Kong sprayed water in her face and tagged out. Too much action to describe, but at one point it spilled over to the stage where I was sitting and I had to dive out of the way to avoid getting trampled by 6 ladies. Can’t say enough good things about this match. This is the match you would want to watch above all the others if you can only afford one DVD to buy.

That left Sara Del Rey for Hamada in a 15 minute classic. Overall, I’d say the match before it was better but that was also twice as long and had 6 women instead of 2. This match was all about stiff kicks to the head because I lost count on how many times they kicked each other. Crowd was pretty evenly split between cheering for Sara and Ayako. It was on par with their previous match in SHIMMER, so if you are a fan of that match, you’ll enjoy this one. Sara won, which gave her 3 victories for the weekend, the only one I believe to have such a claim.

Attendance was around 400. The Highline Ballroom is a tiny place, but a great atmosphere for wrestling. And Joshimania was an amazing experience which I hope CHIKARA can do again next year.