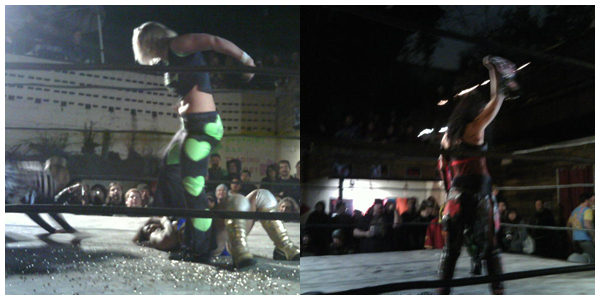 Check out his report and pictures below:

Athena vs. Rachel Summerlyn – 10,000 Thumbtacks Match. HOLY S%#$!!!!! You talk about the Daffney taking crazy bumps. Well after seeing this match, You can do nothing else but to condole these two woman wrestlers by going through the punishment. Rachel is highly known for these death-style matches, so it was expected for her, and not Athena. Athena in person is H-O-T!! As for the match, to me, it was my pick of the two Joshi matches. Crazy spots on the tacks from both women, like Athena snapmaring Rachel on the tacks, Athena diving through the ropes on Rachel through chairs, Rachel hitting her signature Gory Bomb on Athena through the tacks, then pulling the Texas Cloverleaf on Athena on the tacks, but Athena’s Submission Squad buddies interfered, and broke up the hold. The end happened when Athena jumped from the stage on Rachel through a barbed-wire table full of tumbtacks with diving double knees on Rachel’s face, and got the three count.

Portia Perez vs. Lady Poison (AKA Jessica James in her alter-ego) – Dog Collar Match for the ACW American Joshi Championship. Poison entered first with the chain rapped around her. Portia came out and sneak attacked Poison with the ACW American Joshi belt. Then the girls fight throughout the floor. Portia attempted choking Poison in the ring, while Poison was outside. Poison managed to get the chain locked on Portia, and Poison gained momentum. Portia was busted open through the nose. Perez got the Superkick in, then applied the Crossface on Poison with the chain rapped on her. The ending came when Poison got Portia with the Poison Kiss, where she kisses Portia and Perez starts to fall flat on the floor where Poison got the three count, and a new ACW American Joshi Champion crowned. Great match from Poison and Perez.

Great night for the ACW American Joshis. ACW really has respect for woman wrestlers and the craft they bring to wrestling. Hence having a show dedicated to women’s wrestling in the Queen of Queens. And tonight showed that these girls can go to the extreme, despite their gender. Athena and Jessica were the breakouts from their matches. After attending the Queen of Queens 2010 show back in June, tonight show that 2011 will be the year of the Wrestling Goddess Athena, and the year of the Poison. I got the chance to speak with Athena, and pretty much put her over, saying 2011 will be her year. As for James, how many women can say they choke out Sara Del Rey in the Queen of Queens 1st Round match. Jessica can. And with her darker side is on the rise in Lady Poison, expect great things from miss James/Poison.