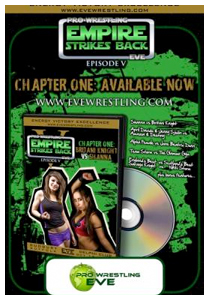 The latest addition to the Pro-Wrestling: EVE DVD series is now on sale.

‘Empire Strikes Back – Chapter One’ features the main event of Britani Knight vs Shanna. The show was taped back in October.

You can pick up the DVD here.

Find out why everybody is now talking about the female wrestlers of Europe with Pro-Wrestling:EVE ‘Empire Strikes Back – Chapter One’ DVD!

See the 18 year old prodigy of Professional Wrestling in Britani Knight battle “Portugal’s Perfect Athlete” Shanna in a tremendous back and forth athletically charged contest!

Sara-Marie Taylor and Carmel Jacob of The Glamour Gym are in tag team action against Rhia O’Reilly & Becky James of Team Storm. The two gyms are tied at one win a piece – who will win the third and deciding contest?

So…Who’s harder then? Who’s tougher? Who’s can give out a beating unlike no other? The Northern Shooters or Amazon & Destiny? These two teams each want to prove they’re the team to both fear and respect and neither will back down!

The Alpha Female is back in action and once again it’s The Glamour Gym that are in her sights – but which member will step forward to fight the German Giant?

‘Coventry’s Loudest’ Jetta retired back at ‘Episode IV – The Final Chapter’ but asked for some microphone time to talk to the fans at Episode V – find out the reason why here!

Scotland’s Nikki Storm battles England’s Saraya Knight in a first time ever contest between Scotland’s best and England’s best! Can the 20 year veteran claim a victory or will The Dynamite Princess show why she’s earned the title of Scotland’s best female wrestler!

Also on this DVD is Part One of ‘At Home With The Knights’. EVE announcer Fred Emerson visited the home of The Knights to talk to Saraya and Britani about their careers in the wrestling business in addition to the history and evolution of female wrestling in the UK as they saw it happening.

Find out how Saraya was trained differently to the other girls coming through the wrestling business and Saraya’s belief as to what lead to the scene evolving. As usual the 21 year vet pulls no punches in everything she has to say!