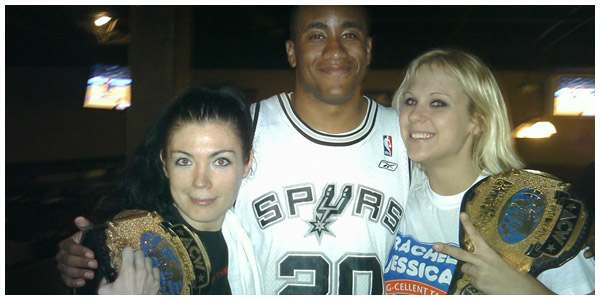 Big thanks to DD reader Brandon once again for sending in another live report and pictures from Anarchy Championship Wrestling in Texas:

Before the show, there was a pre-show match featuring “The Wrestling Goddess” Athena. She teamed up with fellow Submission Squad member (and crowd favorite) Davey Vega in a tag match against Super Electro and his robot partner whose name I forgot. The SS duo took the win in this pre-show match, after Athena and Vega hit the SS Destroyer: a wheel-barrel to a DDT double team, where Vega holds Electro with the wheel-barrel position, and Athena plants his opponent with a DDT, with Vega maintaining the wheel-barrel position. Decent match.

Now on the main show, Athena came back for the main show, and wrestled Jen Alise, a female wrestler off of Belmont, Tx. Athena got the win after hitting her devastating top rope stunner finisher (which got the crowd popping big). I thought it was a decent match, where Athena, once again, shows such strong athleticism and shows why she’s not one to slouch around with. Jen Alise, on the other hand, didn’t do it for me. She was very green in this match, but I see her improving very soon. Favorite moment (besides the finish) was Athena doing the signature handspring, paused for a second, and slapped Alise in the face. That spot had me dying.

Next up, Rachel Summerlyn and Jessica James in 4-way tag team elimination match, for the ACW Tag Team Title. RAJETT (Rachel And Jessica’s Egg-cellent Tag Team) took on the teams of the Children of Pain, Flippy Shit, and the reigning champs the Smurf Nation. Before that match, Rachel and Jessica sat right next to me right after their entrance, acting like fans of the next teams, goofing off as usual. Before the first elimination, the four teams played a game of Chicken (WTF? lol), where each member had someone from the opposing team on their shoulders and threw strikes at each other. The Smurfs were the first to go after Killer Kash, a wrester from Detroit, came out and decimated the Smurf duo, thus getting pinned and eliminated from the match. The end resulted when RAJETT were sqautting outside the ring while the other two teams did some insane high-flying moves on each other (most of them were not landing). After the spot fest end, Rachel and Jessica each pinned a member of the two teams simultaneously, and eliminating both teams. Thus winning the match, and becoming the NEW ACW Tag Team Champions! Pretty enjoyable match from all four teams. The Chicken spot was incredible. I talked to Rachel after the match, and she told me that she did hold the ACW Tag Titles before – with Skylar Skelly. But with Jessica makes them the first female duo to with the Tag Titles, which is a huge thing for the girls having male titles around their waist. (That is if Jessica can put the belt around her waist lol.)

Finally, the ACW American Joshi Championship match! the “Five Star” Amanda Fox, who as a sidenote was awarded ACW’s 2010 Rookie of the Year by the ACW fans, faced the current champion Lady Poison (Jessica James in her alter-ego). Fox played the scaredy cat role in the opening, running away from Poison (trust me, I would, too). But later on dominated midway through the match. The ending came when Fox rolled Poison up, but Poison countered with a bridging roll-up, and while maintaining it, nailed the Poison Kiss on Fox for the 1-2-3, and Lady Poison retains the American Joshi title. A very good back and forth match up between these two women. Excellent showing from Amanda Fox. That amateur wrestling background is really paying off for Amanda, and has really turned heads in the Texas wrestling scene. She pulled of creative submission holds on Poison. I got to talk to Amanda after the match, and she’s a very nice girl. She’s currently finishing senior year in high school, and she’s got her mind set for the Queen of Queens Tournament in June. She is ready for it. As for Lady Poison, she showed why she took that belt away from Portia Perez at the last show. Her creepy, sadistic character has won over the fans here in ACW, and is one to be on the lookout in future shows as champion.

Overall, great show top-to-bottom. The American Joshi action was a great way to build up the girls participating on the next show in St. Louis, Missouri, as Lady Poison defends the American Joshi title against Athena, and RAJETT will now put their newly won ACW Tag Team titles against Daizee Haze/MsChif and Portia Perez/Super Electro in a three way dance. Athena showed that she’s ready for Lady Poison, and RAJETT has become a cohesive unit in ACW.