With several big independent events coming up in the next couple of months, Diva Dirt has reached out to the head honcos in charge of various promotions for our first annual Promoters Season. Over the next couple of weeks, you will hear from the creative minds behind NCW Femmes Fatales, Pro-Wrestling: EVE, SHIMMER Women Athletes and Women Superstars Uncensored.

We aim to pick their brains about their upcoming events, their rosters and on current events. Plus, we look for answers to the questions that fans have wondered about… 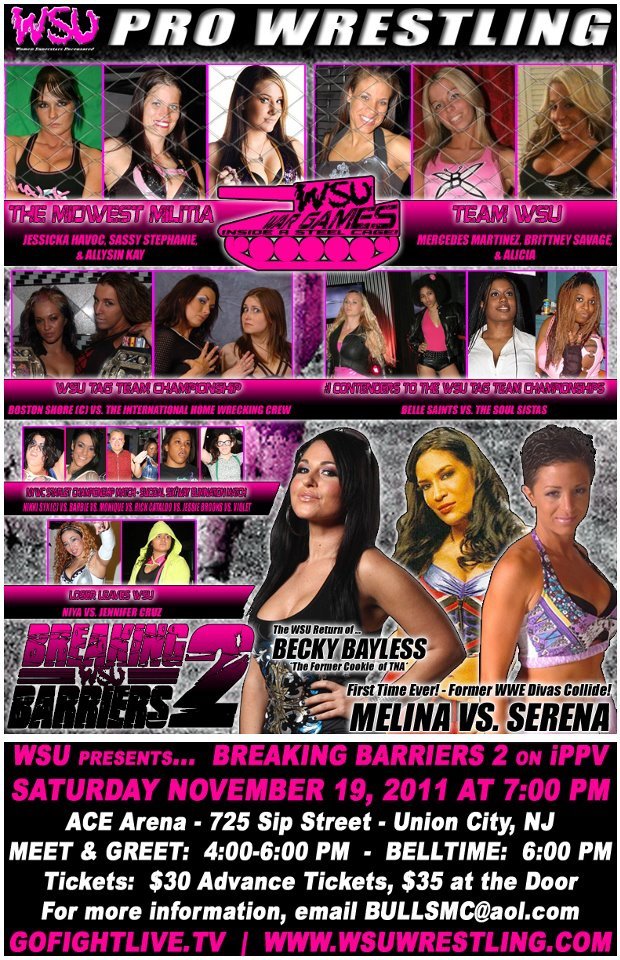 In the first Promoters Season interview, we talk to WSU promoter Sean McCaffrey about the upcoming November 19th Internet pay per view, Breaking Barriers 2, which will see the debut of Melina, the return of Becky Bayless (formerly Cookie in TNA) and a major six-woman main event match set inside a steel cage.

Melina coming to WSU has been big news. What has it done for the company’s exposure?
It has helped a great deal. Since announcing Melina, our website hits went up, our Twitter following grew, and our pre-sale for both iPPV and ticket-wise is the highest its ever been. We are still over two months away from the show and Melina has garnered us a huge buzz.

One of the reasons we booked Melina so far out was to have three months of people talking about it, so when 11/19 comes around, everyone is aware that Melina will be here.

A lot of people are discovering WSU through Melina. Obviously she was a huge, popular name on TV. How do you plan to take advantage of that?
We have already started. We have already started releasing videos promoting the match. We also have just announced a new DVD at WSUWrestling.com called “PASSION: The Hardest Working Women in Wrestling” that fans just finding out about WSU can purchase for $5 when they pre-order a ticket or the iPPV. We are hoping to gain new viewers with Melina and based on the pre-sale, our plan seems to be working. While Melina is wrestling Serena on the iPPV, you can bet we will have her interacting with other people on the WSU roster to help other names on the show as well.

Does this new found audience increase pressure at all to deliver on November 19th in order to keep those newer/casual fans coming back?
Not really. Every show we present, we always pressure and stress ourselves out to have the best event possible. Just because a big name is coming in doesn’t mean we change what we do. Of course this is a huge show for us, but for us, every show is a grand event and we always want fans coming back. It’s obvious to anyone that while we are hoping Melina vs Serena brings in new fans initially, we are hoping they stay around after seeing the rest of the roster, especially the people involved in the WarGames match.

Many Internet rumors about Melina’s booking fee. What do you say?
The number reported is nothing close to what we are paying, but if we were, I guess it shows we got a lot of money to afford that price!

I don’t like to really discuss booking fees with anyone, but I will say for what we paid, we are already seeing a return in our investment.

Next: What has Melina been like to work with? Will Jillian come back? How will WSU tackle presenting a cage match on iPPV?

Continue reading by clicking on ‘Page 2’ below…