Promotion of the Year: SHINE Wrestling 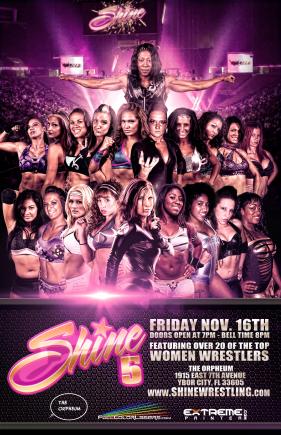 In six months and just five shows, SHINE Wrestling set a new bar for women’s professional wrestling — not quite the typical independent promotion that runs every few months, and not quite a weekly TV show, SHINE is instead the perfect hybrid and has taken the wrestling world by storm in 2012.

SHINE’s journey only began on July 20, 2012 in Ybor City, Florida but all shows since its inception have been well-received by fans and wrestlers alike. Their events have all been presented on Internet pay-per-view, which has allowed for them to capture an international audience, and are combined with unique talent and sleek production values.

Created out of a desire to bridge the gap between SHIMMER tapings (whom usually only run about twice a year), SHINE Wrestling allows for talent to garner more work, as well as newer talent to get their name out there.

Indeed, SHINE has already made a star out of Reby Sky (who can count 2012 as a breakout year for her, impressing in matches with the likes of Jessicka Havok and Kellie Skater), as well as the beautiful, vicious tag team Made in Sin (Allysin Kay and Taylor Made, along with their ‘muscle’ April Hunter) and Kimberly, to name a few.

They’ve also managed to bring in veteran talent like former WWE Women’s Champion Jazz, Sara Del Rey (these two faced off in a dream match during the main event of the debut show), Mercedes Martinez, Rain, Nikki Roxx and Saraya Knight. Their most recent show featured the in-ring return of Amazing Kong, the artist formerly known as Kharma.

We predict that SHINE will only go from strength-to-strength in 2013. With five shows and an established fan-base under their belt, they can now get the ball rolling with more in-depth storylines and characters and will likely introduce a championship belt for the women to all compete for.

Top all that with a very professional looking website, clean and crisp graphics work, and a YouTube channel that is consistently updated with entertaining videos and you’ve got the recipe for success.