Diva Dirt’s Stars of the Week: Kharma and Naomi 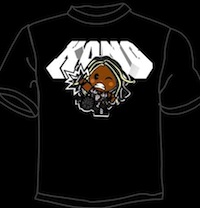 A belated edition of the Star of the Week feature to accommodate last night’s pay per view. For last week, I have picked two people as our stars — Kharma and Naomi.

Former WWE star Kharma gets an honorable shoutout for doing her part for charity. As well as being a force to be reckoned with in the ring, Kharma — real name Kia Stevens — is equally formidable when it comes to philanthropy.

Two years ago, Diva Dirt teamed with the then-Awesome Kong to raise money for the relief efforts in Haiti, and this Christmas Kharma is once again doing her charitable bit by donating proceeds from her new t-shirt to the Marine Toys for Tots Foundation.

We highly recommend you pick up your Amazing Kong tee here. 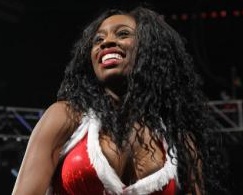 And of course, then there’s Naomi, who last night proved why she was the most exciting Diva on NXT season three more than two years ago as she wowed audiences with her unique in-ring style last night at WWE TLC on pay per view.

While her NXT counterparts AJ Lee and Kaitlyn have found their feet in the WWE, we’ve been waiting patiently for Naomi to get her turn in the ring and step out of Brodus Clay’s large shadow.

Despite competing in two matches all year on TV (both last night), Naomi proved her repertoire in the ring is one of the best in the entire Divas division, and we can only hope she gets more opportunities to show it off.