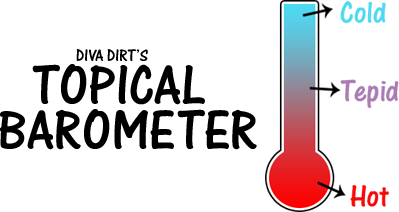 Diva Dirt prides itself on original content, which is why we have totally jacked a fabulous idea from Alan Carr — the topical barometer! Every week, we’ll be looking at the highs and lows and finding out where they rank on our topical barometer. What’s hot? What’s tepid? What’s cold? 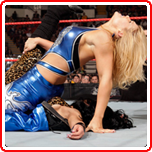 Raw vs SmackDown Divas Tag Team Match, Bragging Rights
SmackDown Divas, Beth Phoenix, Michelle McCool and Natalya scored a big win for their brand at Bragging Rights when they pinned the Raw team to help SmackDown become Bragging Rights champions. Beth Phoenix was particularly instrumental, pinning Divas Champion for the win.
Verdict: Hot. Not many casual WWE fans [not Diva fans] are willing to give credit where it’s due when it comes to the women’s division but the six Divas involved in the Bragging Rights match last Sunday proved that there is talent in the division and their matches aren’t total botch-fests. This match was given a decent length and had the opportunity to tell a good story with each of the Divas getting time to shine and show the audience their skills. Another good pay per view outing. 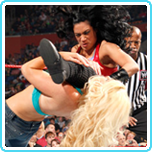 Melina & Santino vs Jillian & Chavo Guerrero, Monday Night Raw
Divas Champion, Melina teamed up with Santino to take on recent rival, Jillian and her seemingly new BBF, Chavo Guerrero. The match ended within minutes, as Hornswoggle came out to the ring for more side-splitting hilarity…
Verdict: Cold. It seems the Divas division on Raw has been brushed with the same stroke as Hornswoggle, Chavo & Santino — filler comedy skits. The booking here was just pitiful and the Divas involved didn’t help themselves one bit by botching every exchange in their portion of the match. For two veteran Divas, this is highly embarassing. 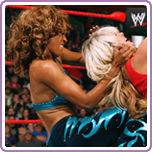 Alicia Fox vs Kelly Kelly, WWE Superstars
Divas action continued on WWE Superstars this week, with last week’s victor Kelly Kelly facing Alicia Fox this week. Though she defeated Gail Kim the week prior, she was no match for A-Fox who pinned her with the axe kick.
Verdict: Tepid. Compared to their fellow Raw Divas’ appearance on Monday night, Alicia and Kelly should be awarded. Not nearly as bad as Melina & Jillian’s work together on Raw, but compared to the week prior [Gail vs Kelly], this match lacked a certain something. Still enjoyable but perhaps a little forgettable. Decent effort from both, however. 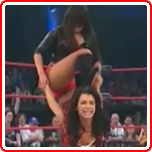 Alissa Flash vs Tara, TNA Impact
In something of a dream match for the Knockouts division, two hard hitting women went at it — Alissa Flash took on Tara, five years after the young Ms Flash jobbed to the then-Victoria on an episode of WWE’s Sunday Night Heat. Now veterans of their sport, these two Knockouts had a tough-fought match with Tara coming out on top.
Verdict: Hot. Loved this one! Alissa and Tara are hard-hitting Knockouts with so much to offer in the ring and they delivered. The match felt stiff, brutal and truly great to watch. Alissa’s curb stomp was fantastic also. 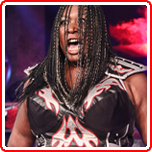 Kong’s Back, TNA Impact
The fearsome Awesome Kong declared she’s back on Impact this week and wasted no time to exert her power over the Knockouts division. Making not one, but two surprise appearances she left destruction behind on Impact.
Verdict: Hot. Kong’s back! She did an amazing job of looking bad ass, care-free about who she pissed off and it was great to see that they had some sort of direction for her. That Implant Buster on Tara onto Flash was great. 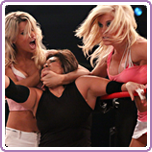 The Beautiful People vs Christy Hemme, Hamada and ODB, TNA Impact
The Beautiful People scored a big victory on Impact, thanks to newcomer Lacey Von Erich. They defeated Christy, Hamada and the Knockouts Champion ODB. Von Erich chokeslammed Hemme for the win.
Verdict: Tepid. Not a bad match but not a memorable match either. One has to question the logic of the Knockouts Champion essentially being teamed with afterthoughts in the division and then losing to the opposing team also. It tells the audience she’s not a priority compared to TBP. 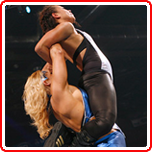 Beth Phoenix vs Jenny Brooks, SmackDown
The dominant force of the WWE Divas, Beth Phoenix also re-emerged on SmackDown this week. The Glamazon squashed local wrestler, Jenny Brooks — taking her time in the effort also.
Verdict: Hot. This was thoroughly well executed with Beth coming across as a monster heel that we all know she can be. She may not be Kong-like, but WWE did a great job in playing to Beth’s strengths and showcasing what a great talent she can be. 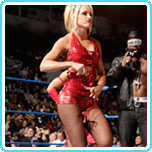