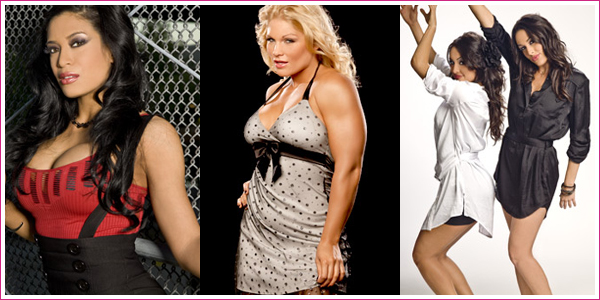 More rumours on each of the Diva trades has circulated. This time, NoDQ.com reports why Beth Phoenix, the Bella Twins and Melina were moved:

Beth Phoenix was moved to Smackdown because it was felt that she lost momentum on RAW. It’s been rumored that she could be paired up with Dolph Ziggler.

The Bella Twins were moved to RAW because Vince McMahon was said to have “fallen in love with them” following their guest host skits on RAW several weeks back. They are expected to be featured in guest host segments on a regular basis now.

WWE is said to be high on both Jilian Hall (McMahon likes her act) and Melina (which is why she was moved to RAW).

In the case of Beth possibly being united with Dolph Ziggler, we can somewhat corroborate. Not to say WWE will go that route, but if they do it falls in line with what we’ve heard. As expected, it doesn’t sound like the Bella Twins will be wrestling much.