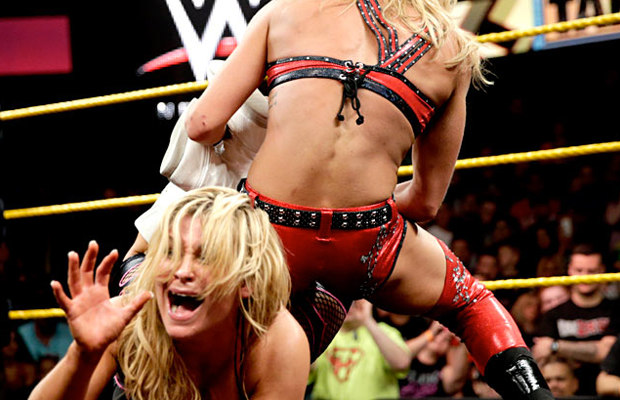 WWE.com has compiled a list of the ten best matches of 2014 so far, ranking a Divas match at the lofty number two spot.

In explaining the choice, WWE.com wrote:

Move aside, gentlemen, because Natalya and Charlotte’s historic NXT Women’s Championship Match at NXT Takeover could end up making a strong case for Match of the Year honors this December.

With buildup to this highly anticipated showdown centering largely on both Divas’ legendary lineages, there was an almost unfair amount of pressure on both grapplers to live up to their family names. Both Ric Flair (Charlotte’s father) and Bret Hart (Natalya’s uncle) watched from ringside as these battling beauties put on a performance exceeding even the loftiest of expectations.

Although many WWE fans are already familiar with The Queen of Harts’s exceptional in-ring prowess, this submission showcase was a coming out of sorts for Flair’s self-proclaimed “genetically superior” Diva daughter. Charlotte matched the Hart Dungeon alumna hold for hold, displaying an eye-popping athleticism that might have (dare we say) given “Naitch” himself a run for his Rolex. In the end, it was Charlotte’s night as she hit Bow Down to the Queen to become the new NXT Women’s Champion.

Natalya and Charlotte also commented on the match. Natalya shared:

“Every time I talk about that match it really gives me goosebumps. It was a match that was career-defining, and I never thought that wrestling in front of 400 people against a rookie with only two years of experience would be career-changing for me. It felt like a WrestleMania moment for me … it was a masterpiece. I felt like Charlotte and I painted a masterpiece, and not everybody gets a chance to do that in their careers, to make magic with someone.”

“I’ve probably watched it back maybe 30 times. To be able to face someone who has paved their own way in a business where she was a generation kid and had so much pressure on her, and to be able to have that moment with her and connect like we did, it was surreal and amazing. I feel like [Natalya] did so much for me, not only as a performer but as a person that night. She brought out a lot of potential in me that I didn’t know I had, so I’ll be forever thankful to her.”

What are the best Divas matches of 2014 so far?