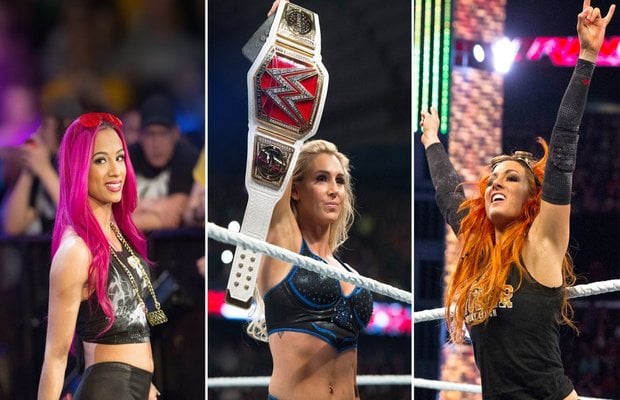 ‘Now ladies, I have set the table of opportunity, now I wanna see… who’s gonna take it?’

It’s been one year since Stephanie McMahon uttered the words above and initiated what was then referred to as the ‘Divas Revolution’. NXT stars Becky Lynch, Charlotte and then NXT Women’s Champion Sasha Banks walked from behind the curtains and made their triple debut, changing the landscape of the division as we knew it, but now one year on, we see if that opportunity was taken?

More TV Time!
Remember #GiveDivasAChance with the infamous 30 second tag match? Well, it’s safe to say that those days are over. The women are now given regular 10-15 chunks across all shows in a combination of matches and interview segments, two matches are now a regular occurrence and main event slots. I’m pretty sure the WWE knows we’ll all start another embarrassing Twitter trend so the women are now given ample time to show what they can really do and boy does it make a difference! Thus, leads to my next point…

Better matches!
It’s pretty obvious that a 2 minute tag match isn’t going to do justice for any of the competitors involved. Methodological storytelling, taunts, signature moves, heck even being allowed to do certain moves that they couldn’t do are all things that you can’t rush. Charlotte has defended the title at every single “Network Special” since she’s won the championship and has wrestled at all 12 events since her debut! The Divas Revolution has seen some of the best matches in a very long time – Paige, Natalya, Nikki, Becky and obviously Charlotte have been at the forefront of the last year’s ‘Network Specials’ and while not all the matches have been 5*, they’re certainly miles better than 3 minute toilet breaks or not even appearing on the card at all. Wrestlemania 32’s triple threat match was arguably the best of that night and landmarked the biggest change since the Divas Revolution…

No more Divas!
At WrestleMania 32, the pink butterfly took one last flight, taking the ‘Divas’ moniker with it… it had been 17 years since Sable first called herself the ‘Diva’ and the WWE ran with it. We’ve seen Divas Undressed, the Diva Search, Diva of the Decade, Total Divas and the Divas Championship, but all that was to come to an end when Lita revealed the new WWE Women’s Championship and the term being abolished. The term ‘Diva’ was connected with the old t&a aspects of women wrestling that worked well in Sable’s day, but slowly became like a shoe that didn’t fit for our new roster of women. The fans roared, the women celebrated across social media and the new era of women will probably never have to compete in a bra & panties dance off gravy bowl contest ever again!

However, it’s not really been the smoothest of rides. Sure there have been some changes, but was it really a ‘revolution’? A revolution is an overthrow, a complete shift in social order… so is there that much of a difference from back then to now?

No space!
With 3 call ups at the same time and just 1 title, there was no space – a year later, there’s still no space. For months we were stuck with endless tag matches between PCB, Team Bella and Team BAD; poor Emma got shafted back to NXT and Natalya vanished. Fast forward a year and it’s still the same situation, with such a small division and no attention made for the ‘B feuds’, everyone else seems to either get lumbered together (BAD & Blonde, Charlotte/Dana, Becky/Natalya) or they just vanish from our screens. Now that the brand extension is returning, this will make a small division even smaller! Do they call up NXT women who might not be ready? Do they just leave it how it is? Do they make another title, even though the other one is 2 months old?

Still lacking good storyline direction!
So after 3 teams aligned, one defeated the longest reigning champion, her friend got jealous and turned on her, so she started bringing her Dad who starts screwing everyone over, then some other woman who wasn’t even in the conversation got her Uncle involved, but now some other old enemy has walked back into the picture. I mean, again this is way better than ‘Piggie James’ and Kaitlyn’s ‘secret admirer’, but come on! We could do with some good storylines now, tell us why Nattie turned on Becky, tell us why Dana aligned herself with Charlotte, let us know why Paige isn’t bothered at Sasha just waltzing in and taking her shot? They have the characters (which arguably all came from NXT), but haven’t got the storylines except “I’m jealous, me want pretty white belt!” which leads what we expected to see…

More for the women!
Sure we can get Becky Lynch beach towels or Sasha Banks on a glass, their matches are longer, the women are being featured frequently, but we are still far from an equal playing field. What about seeing the women in an Elimination Chamber? Charlotte hosting an in-ring ‘Ambrose Asylum/Highlight Reel’ show? Let Paige join The Club? Anyone say ‘TLC match for the Women’s Championship’? The women are the strongest group of athletes in a long time and this is what a revolution means. Having more time is one thing, but being given the chance to do more in that extra time is another. The WrestleMania triple threat match proved that they can take the ball and run with it, but that has probably been the only time we have really seen them come close to really showing us a ‘revolution’.

So, one year on and we’re in the WWE’s ‘new era’ of Women Superstars – a new legitimate looking title, a new roster of experienced and trained women, no more ‘Divas’ and pressure to be sexy and most noticeably, a higher caliber of long impressive matches. The brand extension is sure to switch things up and change the division even more in just over a week and it’s an exciting time to be a fan, but we can’t help but watch to see the revolution take on its next phase.

Yet, the question still on everyone’s lips one year later – when is Bayley joining the rest of her fellow horsewomen?

What do you think about the state of the division since 3/4 Horsewomen were called up? Do you agree/disagree? Let us know in the comments below.