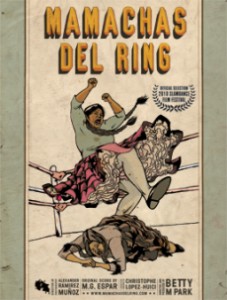 In the emotional climax of Betty M. Park’s documentary Mamachas del Ring, champion female wrestler, Carmen Rosa, faced with an ultimatum by her husband to give up her wrestling career or lose her family, informs the camera that she “can’t leave wrestling and she can’t leave her family either.” It is in the moments that follow that the viewers see the exactly what is in Carmen Rosa’s heart, as her tears and anguish read on her face. Without saying a word, we come to see the emotional tax that balancing multiple identities (wife, mother, business owner, professional wrestler) has taken on our heroine and are almost forced to reflect on our own passions, and the highs and lows we have experienced because of them.

Mamachas tells the story of Carmen Rosa, champion cholita (female wrestler) of Bolivia, and three other cholitas, Yolanada, Julia and Martha, who experience unprecedented fame both in Bolivia and internationally as cholita wrestling gains prominence. Carmen Rosa was on top of the world. She and her fellow Mamachas were not only booked consistently by major wrestling promoter Don Juan Mamani’s Gitano League (think Vince McMahon and the WWE), they were also booked for a large scale tour of Peru, appearing on several popular Peruvian television shows; receiving national media attention.

And then it was all taken away.

A story of betrayal and struggle soon develops as Carmen and the Mamachas are banned from the Gitano League by the promoter, jealous of their success. There’s also a personal struggle for Carmen when her husband gives her the aforementioned ultimatum.

As we watch Carmen Rosa quickly dispose of a male passerby on the street, who compares her being a cholita akin to being a prostitute, we have no choice but to become invested in this traditionally dressed Aymaran (indigenous) woman in her bowler hat and long skirt, and wonder how such a matronly looking woman can become a champion.

Utilizing a character driven approach, director Betty M. Park puts the viewer in the driver’s seat, showing us via interviews and voice-overs, Carmen Rosa’s point of view as she and her peers experience the world of women’s wrestling in Bolivia. Yet what separates this documentary from many of its contemporaries is the creative use of claymation in order to reenact past conflicts as well as emotions that could not be displayed via traditional film. This is especially true in the scenes exploring the allegations that Don Juan Mamani became jealous of the Mamachas, kicked them out of his league and made it his mission to ruin the Mamachas’ careers forever. While a voice-over or interview from Carmen Rosa would state the point just as clearly, it is the clay animation that provides the viewer with a visual and places them in the heat of the moment.

If there are any drawbacks to the documentary (and any would be miniscule) it is that Carmen Rosa is so fleshed out and engaging that the other characters are often absent. While Carmen is certainly dynamic enough to carry a documentary on her shoulders, it would have been interesting to see a little more of her fellow Mamachas, Yolanda,Julia, and especially, Martha. I would be particularly interested to learn their perspectives on Carmen, for her passion is definitely strong enough to polarize those around her. However, the absence of these voices does not detract from the enjoyment of the film in any way.

It is the Mamachas’ attempts to not only make it in the wrestling world on their own, but balance their love for women’s wrestling with the gender roles that society restricts them to, that tugs at the viewer’s heartstrings. The world of independent wrestling is an unforgiving one, but as Mamachas del Ring demonstrates, it is arguably harder for women, as evidenced by Carmen Rosa taking extra bookings to financially take care of her children, and simultaneously battling the emotions involved with leaving her family for days at a time. Coming to a head in the scene described in the introductory paragraph, Carmen Rosa is set up to defy the odds again and again.

However, the most emotional aspect of this film, and the reason for my glowing review, is not in how these seemingly unbreakable foreign women defy the odds in a sport built for men, nor does it have anything to do with wrestling. It is in how universal these themes are for all individuals who have ever struggled with a passion against all odds. From those of us who grew up with single parents forced to meet that they can’t meet themselves, to those of us who wished to pursue an interest that is not popular with our peers, Mamachas del Ring serves as a a sense of motivation. If Carmen Rosa can run her own wrestling company, represent her Aymaran traditions, entertain her loyal followers and continuously fight to improve the plight of women everywhere, then why can’t we accomplish our own dreams?

In conclusion, this documentary is definitely one worth seeing. Director Betty M. Park has created nothing short of a masterpiece. In what could have been little more than a character study of a woman wrestling in a country many of us will never travel to, we are instead provided with an emotional and relatable human being, exposing every last strength and flaw.

Heart wrenching and raw, this documentary is one that belongs in your DVD collection.

Watch the trailer below: