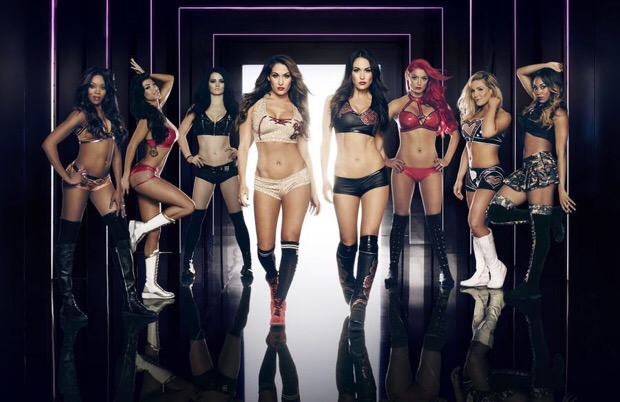 Good news Total Divas fans! E! has officially picked the show up for a fourth season, as revealed per a press release this afternoon.

Season four had already all but been confirmed, as a return date of July 7th was announced at the end of the season three finale.

More good news? It looks like Naomi is back as a full-time cast member after unceremoniously being removed during the second half of season three.

But.. the bad news? It seems to be Cameron and Rosa Mendes may have now suffered the same fate as Naomi and Summer Rae did last fall.

Per the press release, no storyline based information is given. However, it does state that “Cameras once again showcase the professional and personal lives of the WWE Divas: The Bella Twins™(Nikki and Brie Bella), Natalya™ (Nattie), Naomi™, Alicia Fox™, Paige™, and Eva Marie™.”

In addition to the Total Divas news, it looks like we could also have some info on that secret project Maryse and Kelly Kelly seemed to be filming for last week. Included in the new show descriptions is a program called WAGS aka Women and Girlfriends of Sports. No cast is listed, but the show description reads:

“It’s all about the “Women and Girlfriends of Sports” in this new one-hour, eight episode series that goes inside the world of some of today’s hottest professional athletes, from the perspective of the women behind them. “WAGS” follows the beautiful, driven and always outspoken women who make up an exclusive club of spouses and girlfriends of professional sports players. Constantly vying for seniority and respect, these women live a glamorous lifestyle full of perks, but the diamonds, first class travel, cars and mansions don’t come easy and top positions in this elite group come only to those who follow the rules and know how to play the game.”

With Kelly currently engaged to Ice Hockey player Sheldon Souray, and Maryse, of course, married to The Miz, this sounds like it could definitely prove to be the very adventure they’ve been teasing through social media.

Are you excited for Total Divas season four? What about the cast changes? And does WAGS sound up your alley?