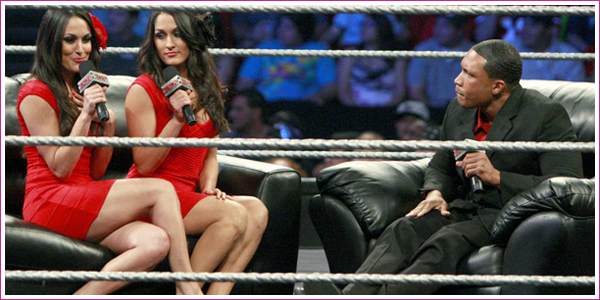 I gotta be honest, I didn’t think much would come of the Bella Twins’ move to ECW. I expected it would be their restover on the plane to Releaseville, but last night’s show actually booked the Bellas in a way that set up a future storyline. I’m sure we remember their brief feud before WrestleMania that was dropped abruptly with a WWE.com video explaining that they’d ‘made up’. Well it looks like we could get a full blown feud between Brie and Nikki on their new home of ECW:

This was a really fun segment, I can’t deny it. I was laughing hard when ECW newcomer, Abraham Washington commented on their hair insisting it must be a weave. Weaves and extensions are one of the fun things we at Diva Dirt like to gossip about, in fact we spent a lot of our live blog this past Sunday talking about different Diva weaves haha. This guy has got some swagger, the jokes about a horse running around bald were hilarious — I refuse to believe that came from the minds of the Creative Team.

Meanwhile the subtle bickering between the twins was also fun. Who knew that these two had mic skills? They came across really well on the microphone and showed more charisma in one segment that they’ve shown since they started on SmackDown last year. And for once, isn’t it a nice change to have Divas who can talk without sounding like shrieking banshees? Seriously, most Diva promos make me cringe including Tiffany’s promo last night.

I really enjoyed the segment and was pleasantly surprised by these two. Seriously, who knew?! Now if this turns into a wrestling feud, that’s a whole ‘nother matter…

It does make me wonder though, why doesn’t WWE try and book them in a speaking role? Maybe as managers where they could be the mouthpiece to someone?