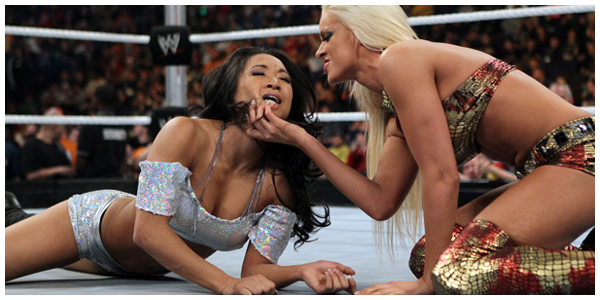 The never-ending Divas Championship tournament was stretched yet another day as despite advertising the end of the sucker, we were swerved with an interpromotional tag team bout instead. It all went down at last night’s Elimination Chamber pay per view where Gail Kim and Maryse were due to go one-on-one for the vacated title. After weeks of embarassingly bad handling of this ‘tournament’, we were finally ready to be done with it and crown the new champion — with care so little in supply, as to who won at this point. But things became ‘flawed’, you could say, when Vickie Guerrero announced that as a result of disparaging comments by the Raw Divas against the SmackDown Divas, the two would be forced to team up against Michelle McCool and Layla aka Lay-Cool aka Simply Flawless.

Let’s start right at the beginning though, where moments before their match, we saw a backstage segment between the two would-be challengers:

We see Gail walking backstage, with a perfectly toned tummy I might add [jealous!], as Maryse catches up to her and once again speaks to her in French. We then get the reveal that Gail also speaks French and has understood all the smack that ‘Ryse has been talking about her in recent weeks. She finishes with with an amazing mock hand flip in Maryse’s face which not gonna lie, had me rolling. This was a fun little segment that I really liked; Gail spoke more than she’s spoken in a year on the roster and proved that she has some personality which was really exciting to see. It’s like Maggie Simpson finally talking! The hand flip was a fabulous added touch also. I thought the reveal that Gail speaks French etc. was nicely done and I can’t say that I saw it coming — it seems a little too sophisticated for the Raw writers, who are usually known for lame-duck segments like the Jerry Springer Show on Raw last week, so I was pleasantly surprised. Gail was great here and I want to see more of her talking, she’s got the goods in the ring — she just needs the voice to back it up and get across that personality.

Next up, we have the Divas Championship match turned tag team match:

As the Divas make their entrances, the bell rings and Maryse and Gail face off, we are interrupted by SmackDown’s ‘official consultant’, Vickie Guerrero. Guerrero calls out the Raw Divas for their ‘disparaging comments’ about the SmackDown Divas and interestingly calls herself a Diva, which hasn’t been said about her int he past. Guerrero says as the only Diva with authority in the building — yeah doesn’t make sense to us either — she’s postponing the Divas Title match in favour of a tag team match between Raw and SmackDown. Out come Michelle and Layla for this last minute bout…

Gail and Layla start things out with a lock-up and Gail hits a lovely side takedown, followed by an armdrag into an armbar. Gail tries to tag out to Maryse but Layla wriggles free and the tag is avoided as Gail continues to go after McCool’s protege. Gail throws Layla into the ropes and goes for an armdrag but Layla counters into a beautiful pin attempt. I was definitely impressed by Layla’s technical, fast-paced counter here — she has gotten so confident in the ring. Layla takes control with some great kicks and throws Gail into the corner and runs at her, Gail jumps through the ropes onto the apron and Layla meets the turnbuckles front-first. Gail hits a shoulder block on her opponent and jumps over the top rope into a sunset flip but no three-count. Layla is now in the corner as Gail goes for her patented shoulder block through the middle rope and tries to go up top. Meanwhile, Maryse begins pulling at Layla’s hair — inadvertently distracting the referee as Michelle big boots Gail off the top rope from the outside.

Gail struggles to get back into the ring and receives no support from her tag team partner. Meanwhile, Layla tags in McCool and they hit a tandem baseball slide on Kim knocking her right back to the floor outside. McCool rolls Gail back into the ring and goes for a cover but Gail kicks out, she then repeatedly smashes the back of Gail’s head into the canvas before applying a chinlock. With Gail still struggling, McCool then applies knee strikes to her back relentlessly before picking her up and throwing her against the ropes. Gail manages to come back with a kick to Michelle’s face and then a clothesline. Gail then begins struggling to her corner to tag in Maryse but once she reaches her corner, Maryse moves her hand away and instead pushes Gail’s face and as she turns around, she’s met with a big boot from McCool. Michelle then hits her Faith Breaker, sold beautifully by Gail, for the 1, 2, 3 and it’s all over.

Post-match, Maryse is seen getting into the ring, she holds up Gail’s face and begins talking trash before picking her up for the French Kiss DDT, once again sold perfectly by Kim, adding further insult to injury. Maryse looks down at her handiwork and is met with a chorus of boos before she leaves.

It definitely wasn’t what we expected but at the same time, was it so bad? I think not. I don’t agree with WWE taking an advertised match on a PPV and then doing away with it for the sake of well, who knows for what reason. There are people who paid to see this match and they were screwed out of their $40+ and that’s not cool. This whole Divas Title tournament situation has been laughable from the beginning with 2-3 minute matches and then gaps that last weeks on end before the next round of matches. WWE has given fans no reason to care about this tournament because it’s obvious that they couldn’t give a shit either. And quite frankly, many have stopped caring who wins at this point.

That said, I really liked the segment closer with Maryse laying out Gail. Having just worked an incredibly lengthy match all on her own and to have this then happen to her, it creates a great amount of sympathy for Gail and is a great go-home segment for that eventual Divas Championship match. Should it have been done here? Hell no. This should have been done last week on TV when they had the chance but apparently they had bigger things in mind for Gail like checking up on Bret Hart. Who wants to see an angle to set up her PPV match when you can see her backstage? The last ditch effort to push this feud should not have been done at the PPV, it looked amateurish and it was a total bait and switch, people have every right to be angry. But the segment for what it was, was well done and sold that match. My worry then would be that they wait another freakin’ three weeks and lose all that momentum that they sacrificed a PPV for. Put the match on Raw tonight, go off that momentum and salvage what’s left of this trainwreck tournament.

The great thing here for fans is that it provides some unpredictability to a tournament that seemed so predictable from the get-go. Maryse had it in the bag and it was just a case of when. But her actions last night surely deserve a comeuppance? And if they have that Divas Championship match on Raw tonight, the chances of Gail winning have increased slightly, making this match a little more unpredictable. They could still have Maryse win but after being humiliated, it’s that old school tale of the underdog coming back and fighting against the odds for the win. The odds on Gail winning the title has increased, even if slightly.

As for the match, it was probably better than what we would have gotten if we had our advertised match. Expectations for Gail vs Maryse were low. I don’t know why they changed this to a tag team match but I have my theory; it seems like WWE were trying to book this to be a solid show from top-to-bottom and perhaps felt Gail/Maryse would have been a chink in the armour. It really could have gone either way — matched it’s low expectations and been the weak link on the card or exceeded expectations and fall in line with the rest of the PPV. Still, it’s a risk. By putting Michelle and Layla into the match, it seems like they mitigated the odds to deliver a solid bout for what they felt should be a solid PPV. Bear in mind, this is the last PPV till WrestleMania now and it has to help sell that major, major event. I don’t know what their thought process was but that is my theory. McCool has proven to be a commodity on pay per view, always delivering 100% in her outings and can be trusted to lead the Divas on PPV.

The work itself was great and I particularly loved seeing Gail vs Layla. You can add Gail to the list of talented Divas that Layla just bounces off of so well despite being green herself. She has improved ten-fold and I think the standout for me was her quick pacing and comfortability in the ring to counter that armdrag into a rather technical pin setup. You have to know what you’re doing to be able to pull off a move like that and it seems Layla’s confidence has skyrocketed. I’m super proud of her, she’s become a great worker and I think she was solid on this PPV and totally deserves the bonus that comes with being on a PPV. A nice way to reward a talent that is improving, showing hard work and dedication. She doesn’t rest on her laurels like Maryse or Kelly Kelly.

Stripping away all of the controversy around the bait and switch, I think you’ll find this was a good match with solid effort from the three Divas who actually wrestled. The post-match segment was also well done too. I’m in two minds about this PPV but I’m leaning more towards ‘satisfied’.