As everyone knows, on January 28th the WWE and the professional wrestling business witnessed another milestone. After 30 other Royal Rumble events, finally the fans got to witness a female Royal Rumble match. The equality for women has been slowly happening. We have had a first women’s Hell in a Cell match in 2016 (that was not continued in 2017), a first Women’s Money in the Bank winner in 2017, and now a first Royal Rumble match and winner in 2018. Stephanie McMahon has also announced during the beginning of RAW on January 29th that the fans will yet again witness a first, the first ever Elimination Chamber for the women.

Equality is happening, but at a slow pace. Some may say that they are still not being treated equally because the men continue to have more matches on any given televised event. The biggest problem, however, is the gender pay gap. Does Charlotte Flair or Alexa Bliss make just as much as Brock Lesnar or Aj Styles? Why are the men still making more money than their female counterparts?

Citing the source of The Daily Beast they bring about a good reference from former Divas Champion, AJ Lee.

“Former WWE star and New York Times bestselling author AJ Lee called for her then-employer to close the wage gap back in 2015 but, according to an article published by Forbes at the end of last year, women are still a long ways away from making bank comparable to their male counterparts.” This was reflective over her tweet in 2015 directly to Stephanie McMahon herself.

@StephMcMahon Your female wrestlers have record selling merchandise & have starred in the highest rated segment of the show several times,

The Daily Beast goes on to explain how the male superstars who are the highest paying are in fact the “part-timers” of the company such as The Undertaker, John Cena, and Brock Lesnar. So why is it that superstars who show up maybe a few of times a year make more than female wrestlers who are there day in and day out?

“So why is Naomi, for example, and the rest of her women’s wrestling cohort, paid so much less than Lesnar, Cena et al, who show up a handful of times a year yet make 36 times as much, based on the reported earnings of Charlotte Flair, WWE’s highest paid full-time woman wrestler?”

Professional makeup artist and former WWE glam artist Stella Kae also called on WWE to give women the respect they deserve in regards to pay.

As people become more socially aware in this country, I wonder if WWE will ever address equal pay for women. ?

“Lesnar, for example, despite being the champion, only wrestled in six televised matches in 2017. Meanwhile, former women’s champion Naomi, who also happens to be African American, was stripped of her title after nine days when she couldn’t defend it due to injury”

When looking into other factors of why the women are getting paid less than the men, checking out other resources per Chris Harrington and Brandon Thurston of Wrestlenomics, this author found some reasons why the women seem to be on the low pay range. Merchandise sales is a reason why the pay gap could still exist. Some women do not even have merchandise such as Tamina, Lana, or Dana Brooke (this can include Emma and Summer Rae before they were released).

Some women have hardly any merchandise such as Natalya, or Alicia Fox who just finally got her first shirt. If one were to look at the Superstars featured on the WWE shop, the men dominate over the women where the top sellers are displayed. The current superstars are listed as follows: John Cena, The Shield, Steve Austin, Rusev, Finn Balor, Ronda Rousey, AJ Styles and Sasha Banks. Ronda just being added can be contributed to her debut, and the only other woman listed is Sasha Banks. Ronda replaced Alexa Bliss on the list, so therefore none of the current champions are represented as top sellers. 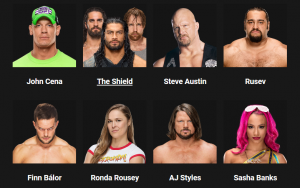 Although WWE has done an amazing job in giving the women more matches than they used to, as well as longer matches, they still have a long way to go. This author would love to see 4 matches for the women on any given RAW, Smackdown Live!, or PPV event. Also, maybe more titles for the women, as more women come up from NXT. Perhaps Tag Team titles, or other titles equivalent to the Intercontinental or United States titles would help create better feuds and well thought out storylines?

With Total Divas reaching 100 episodes, the women having the Barbie doll line, more and more t-shirts and other merchandise, let’s see women make that last strive for equality. Equal pay.

What do you think of the women still making less than the men? Could having more merchandise or television time help them with making more than the men? Sound of in the comments below