Eve Set to Debut In the Ring, But Does She Deserve It? 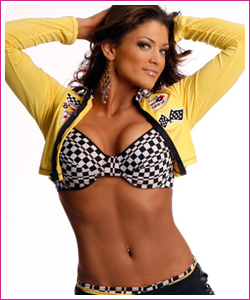 Recently Smackdown Diva Eve has begun to wrestle at WWE house shows and is set to make an in-ring debut on Smackdown next week (see Smackdown spoilers for more details), wether or not she deserves to have more of an in-ring role is up for debate, personally I feel she deserves it. Eve hasÂ wrestled against Natalya, Beth Phoenix and Maryse at house shows; she has also teamed up with Candice, Michelle McCool and the Bella Twins. It seems the WWE wants to prepare her for the ring and test out her wrestling ability to see if she is worthy for WWE television, judging by her performance in her first televised FCW match, she is capable but will need to be carried by a veteran.

It is about time that she had a more in-ring role, since she has been in the WWE for just over a year now. Other divas have entered the ring after less than a years training, such as Maria and Ashley – some might say that wasn’t a smart move. Eve however shows promise, her first televised FCW match displayed Eve with some interesting wrestling skills, some might say they were superior than Maria‘s or Ashley‘s at the time of their WWE debuts.

A number of sites have also been reporting that she is a decent performer in the ring. The televised FCW match showed us that Eve can grasp the basics of wrestling; she can carry another wrestler, sell moves, execute manoeuvres and tell a story during the match. She has also proved on Smackdown that she can act, and grasp the basics of the wrestling business; she also has decent microphone skills. When Michelle attacked her she displayed in-depth acting ability, she genuinely looked like she was in pain. Judging by her backstage interviewing she can also cut a decent promo.

It is likely Eve will be built as an underdog, like so many before her, but she will come out on top eventually. She wants revenge against Michelle for attacking her, and wants to prove to the WWE universe she can do more than interview. The angle of wanting to prove she can do more than wrestle is however unique.

Natalya has mainly been put against Eve in house shows because she can carry her through a match; Eve has been mainly winning viaÂ roll up. Because Natalya is jobbing to Eve in house shows matches some fans have expressed anger, I myself think it is a smart move, Eve is being put over and carried so she gains popularity and becomes better in the ring. Whatâ€™s left for her is to create her own diverse move set and character so she stands out over the other cookie cutter faces.

If Eve wants to wrestle, I say let her! The more the merrier, but only when she and WWE management believe that she is ready. Letâ€™s hope WWE doesn’t make the same mistake that they did with Maria and Ashley and push her into a situation she is not ready for, resulting in sloppy wrestling. She would also be quite an addition to the divas roster because she is not the stereotypical diva and brings some degree of racial diversity to the division.

Iâ€™m sure the match with her and Michelle would be decent for a debut match, because thereâ€™s storyline development and Michelle can carry Eve. What I donâ€™t like is Michelle taking all the spot light, but thatâ€™s a different story. By having Michelle win, Eve can take the underdog angle, and train and one day beat her – which will result in much excitement from the fans.

For her next match she should go against Natalya, I do not want to see Natalya job but Eve needs some building since she is set to job against Michelle. It might also be a good idea for her to have some matches on ECW against Katie Lea; Katie could carry her through a match, but again weâ€™d be sacrificing a talented heel to a diva-search rookie wrestler. With ECW’s short programming and questionable booking, that isn’t about to happen anytime soon. In the past Smackdown divas have been used on ECW so why not put her on ECW while she trains so she can get some exposure?

Some great talent has come out of the diva search, with practice, passion and determination why couldn’t Eve be the next big thing to come from it? just like Maryse, Christy Hemme and Michelle McCool among others.

What do you think?Â  Does Eve deserve to be in the ring?