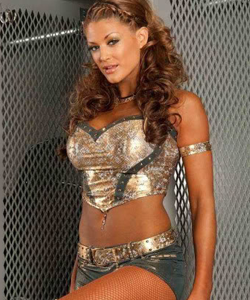 In an interview with the sports blog With Leather, WWE Divas Champion Eve Torres opened up about a number of topics, most notably giving us a peek into the perspective of current WWE Divas.

When asked if she sees the Divas landscape changing with the departures of Kelly Kelly and Beth Phoenix, Eve says:

“It’s hard to say, because we never really know what they’re thinking. As much as people think we really know what’s going on, we really don’t. On Mondays at 4 PM, half the time I have no idea what’s going on. Right now, we have a great group of girls – hungry girls – who all want to contribute to the Diva division. That’s what I really care about. Obviously, I’m delighted that I’m part of an interesting storyline, but whatever I can do to help this division and get it back on top is just something that I – and all of the other girls – am willing to do, whether that means helping new talent that comes up or re-polishing the talent that already exists on the roster.”

On the possibility of another round of the Diva Search:

“Actually, there are a lot of rumors that they’re going to do another Diva Search, and I’m hoping that there is one. The WWE has found incredible female talent through the Diva Search, even it’s the women who are kind of casual fans and just aren’t sure if they can commit all the way or the women who are intimidated about the approach and the FCW. Hopefully we do another one because it would be great to see more women coming into the division.”

If she sees a future for herself in acting:

“I love acting and I love developing these characters, finding out who they are and committing to them. I’d love more experience with that. Hopefully, one of these days, the WWE will put a Diva in a film. Eve Torres for The Marine 4.”

It’s a pretty candid interview, so it’s definitely worth a read. Check out the full interview here.