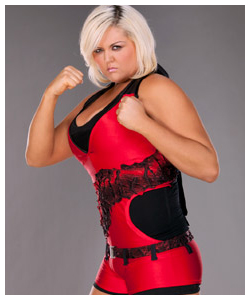 As Diva Dirt first broke, WWE recently signed Florida-based independent wrestler Isis the Amazon to a contract recently. Isis debuted tonight on WWE NXT as Aloisia, one of the six rookie Divas competing on season three of NXT, which is due to begin next week.

We are told that Isis was signed to her contract two weeks ago with WWE specifically earmarking her for a spot on NXT, presumably due to her unique stature as she stands at 6’9″ tall.

Isis was first spotted at the FCW Arena a few weeks ago and again at an FCW live event last Friday, leading us to speculate that she had been signed. A reliable source confirmed our story on Monday and tonight, she debuted on television.

The rookie was originally going to go under the name of Lindsay on NXT, however for whatever reason, she is now known as Aloisia. Her NXT pro will be Vickie Guerrero.