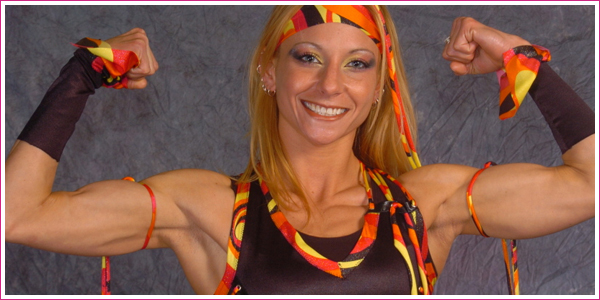 Diva Dirt‘s Steven had the opportunity to speak with SHIMMER veteran, Daizee Haze in an exclusive interview. Daizee discusses being SHIMMER’s head trainer, a future in WWE or TNA and even tries her hand at her own Wrestlicious rap!

First off, thank you Daizee for taking the time out to do this  interview with us. Let’s get right into things: What inspired you to get  into wrestling?
Daizee: Well as a kid I was never allowed to watch wrestling, so it wasn’t something I dreamed of doing or becoming. It wasn’t until 2001 that I was exposed to wrestling and it was the technical amateur style and athleticism that caught my eye, but I saw the way women were portrayed and I wanted to change that.

Who are your idols in the ring, past or present?
Daizee: When I started watching wresting in 2001 Kurt Angle and Chris Benoit were the two that caught my eye and impressed me the most. As far as women go, Molly Holly is probably the woman I admire the most.  Jim Cornette is fabulous all around. Marty Jannetty and Shawn Michaels are awesome together. And the All Japan women are just on a whole other level.

Last year, we saw you take on Cheerleader Melissa in a match on TNA Impact. How was it performing on such a widely known program?  Were you ever offered a contract or was that a one shot deal?
Daizee: Well I worked for TNA quite a few times when they ran the weekly pay per view out of the Nashville Fairground.  Delirious, Matt Sydal [WWE’s Evan Bourne] and I spent two years going down to there every Wednesday doing dark matches for their Xplosion programme.  So I made a lot of connections over those years, so once they moved to Universal, people were pushing for me to get down there. It was a last minute thing, I think Jazz was supposed to do those tapings but had something come up and couldn’t make it, so Chris [Park, TNA’s Abyss] called me up to see if I could stand in for Jazz and I agreed.  It was a great experience and I am close with alot of the guys and girls down there so it was fun to see everyone and I thought Melissa and I had a pretty good match. I received a lot of positive feedback but never had any kind of follow up with them. When Gail Kim left the company, I know I had a handful of girls including Gail Kim and Traci Brooks that were pushing for me to come in to take her ‘athletic babyface’ position, but I never heard anything from them.

You’ve competed on nearly every volume of SHIMMER since it’s inception. Is there any possibility of seeing you in TNA or WWE in the  future or are you a SHIMMER lifer?
Daizee: I love SHIMMER and I have been there since the beginning, but there comes a point when you have to leave what is comfortable and move onto bigger things. If you stay in one place forever, stagnancy is inevitable.  You have to keep learning and you have to keep challenging yourself in order to learn.  You have to surround yourself with people possessing knowledge and experience greater than your own. I would capitalize on an opportunity to be in WWE.  When you think about it, that is what American wrestling is, and I want to be a part of wrestling, so why wouldn’t I want to be a part of the WWE? I never liked how they portrayed their women and some of the things that I go back and watch are just baffling like Trish [Stratus] being on all fours barking like a dog, but I do think they’ve done a much better job the past couple years trying to get women over as wrestlers. When I honestly look at the possibility of being in the fed, unless I am willing to get a couple surgeries, I don’t know if I have precisely what they’re looking for. As far as TNA goes, I’m definitely up for working with them again.  They have a great crop of girls down there that I am very familiar with and have wrestled numerous times.  TNA could do tremendous stuff with them if they capitalize on the talent. The past couple weeks since Melissa and Sarah Stock debuted the women’s matches have been great. I’d love to be a part of their women’s division and I think I’d be a great addition to it as well.

You were named head trainer at SHIMMER’s training facility. How has it been training the next generation of female wrestlers, so to speak?
Daizee: Training has been a great experience. You know, I got into wrestling to change the way women’s wrestling is looked at. Change takes time and you have to pass the message onto the next generation. To make a change you have to make an impact and I saw training as a way to make that impact and pass on the message of my mission. Currently, I have three students all at different levels. Rayna VonTash is my first student [started in October 2008] and she made her SHIMMER debut in a Sparkle match at the last set of tapings in early May [2009].  She will make her DVD debut on Volume 26. Starting the course was one of those ways to keep challenging and pushing myself to improve, while also helping others. Win/win situation.

Do you keep up with WWE’s and TNA’s product? Is there anyone on those rosters you would like to mix it up in the ring with?
Daizee: As frustrating as it can be, I do keep up with both products. There are alot of people I’d like to get in the ring with.  I’ve been on shows and such with most of the girls on both rosters whom have a background on the indies, but I haven’t wrestled quite a few of them. I’d love to work with Beth Phoenix, Nattie Neidhart [Natalya], Gail Kim, and Victoria [Tara].  I wrestled Mickie James in TNA as Alexis Laree, but that was in 2003 and I’d really like to see how things would turn out now.

You’ve said yourself that ‘dynamite comes in small packages’. Do you often find yourself underestimated due to your size?
Daizee: Yeah! Not only by my size but just my over all look as well. I remember one instance in particular, it was early 2005 and I was in California working for APW where I defended the “Future Legend” title against Cheerleader Melissa. I remember after the show, everyone was called up to the office one by one for their pay. Roland Alexander was standing there and he looked at me and kind of in a hesitant manner said, “You know, you’re a lot better than I’d thought you’d be.” I thought it was funny and I find that to be a lot of people’s reaction after seeing me wrestle for the first time.

Your ‘flower power’ gimmick has been a constant for the majority of your career. What’s the story behind it? Were there other gimmicks you considered?
Daizee: It’s kind of a dedication to my dad who was a free, hippy spirit and deep down, I’m an old hippy too sans the dirty clothes and lack of hygiene.  I love the hippy sense of freedom, peace, love, respect and unity and I think it’s something there needs to be more of all over the world. Sadly, my dad died when I was 15 but carrying on his way of living is a way for me to keep his memory and positive outlook fresh in my mind.

The SHIMMER roster seems to be a very close-knit group. Has there ever been any bad blood within the promotion?
Daizee: Not to my knowledge but I tend to separate myself from any kind of tension or negativity.

What’s next for Daizee Haze? We’ve seen promos of you in Wrestlelicious under the name Marley Sebastian. Is there more on the horizon for you there? Will you have a rap soon?
Daizee: Only time will tell.  I’ll always be around but maybe Marley is the new hotness [minus the Sebastian]. A rap? You mean like: “My name is Daizee / Some say the Haze / My wrestling will leave you in a maze / Some say what I’m smokin’ may be suspicious / But that’s what makes Daizee so Wrestlicious!” [Applause]

On a more serious note, what have learned from your time in the industry thus far? Any advice you’d like to pass on to other female wrestlers or aspiring ones that may be reading this?
Daizee: Man, you gotta do what you love doing and take the good with the bad. Anything you do has positives and negatives, but you gotta focus on the positive and have fun. You only live once and you gotta make the most of it. “Lead the life you love, love the life you live.”  Set your standards and boundaries and stick by those, don’t let conformity change you. Be your own person and fight for what you believe in. “Get up, stand up, don’t give up the fight.”

That just about wraps things up here. Thanks again for all your time, Daizee. Any parting words for all your fans and followers here at Diva Dirt?
Daizee: Everyone, keep your heads up and your hearts open. Stand strong and stand tall. One peace, one love, one haze… Daizee Haze.