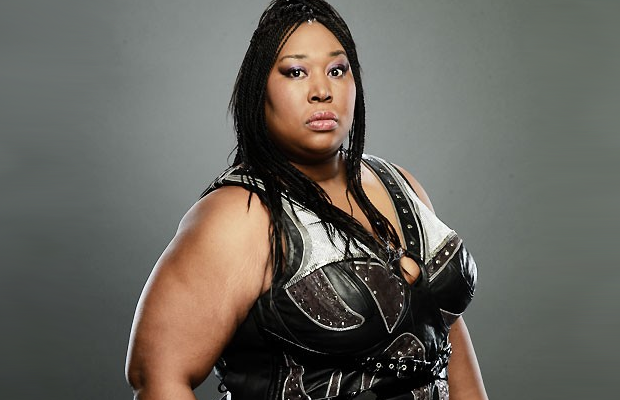 In her first exclusive interview since being released by WWE, the star known as Kharma, Amazing Kong and Awesome Kong speaks to Diva Dirt about her time in WWE, her departure from the company, her return to the ring, her plans to star in a reality show and much, much more.

For Kia Stevens, WWE had always been the dream. Since starting her career in the dojos of Japan, to breakout success in TNA as Knockouts Champion, WWE was where she wanted to be. In December 2010, Kia got the call that changed her life — and she reveals for the first time, it couldn’t have come a moment sooner. “I was 14 days away from announcing my retirement,” she confesses.

As Kharma, she broke the mold for what it meant to be a WWE Diva and had monumental success with video packages hyping her debut, the wrestling world abuzz for her appearances, and she even made WWE’s video game two years in a row. Not bad for a woman who was only on television for one month.

Stevens, 35, admits it was “bittersweet” when she had to put her dream career on hold as she became pregnant. Kia would later tell TMZ she lost her baby, and in January of this year made a shocking return at the Royal Rumble as only the third woman to compete in the prestigious Rumble match — and the superstar tells us she didn’t even inform her fiance she was taking part!

Here, Kharma talks exclusively and openly for the first time about her time in WWE, her release, her thoughts on the Divas — “They don’t get enough credit” — she crossed paths with, plans for her character, filming those amazing doll segments, the Royal Rumble, plans for her return and release and much more.

The former TNA Knockouts Champion also tells us about her return to the ring at SHINE 5 two weeks ago, her plans for the future and why she won’t be returning to TNA.

Listen to the exclusive interview below:

* Download the interview by right-clicking here and selecting ‘Save Target As’.

* Stream the interview by hitting the play button below:

Kharma will be in action at RESISTANCE Pro in Chicago, Illinois on Friday, November 30th. Tickets available at the door.