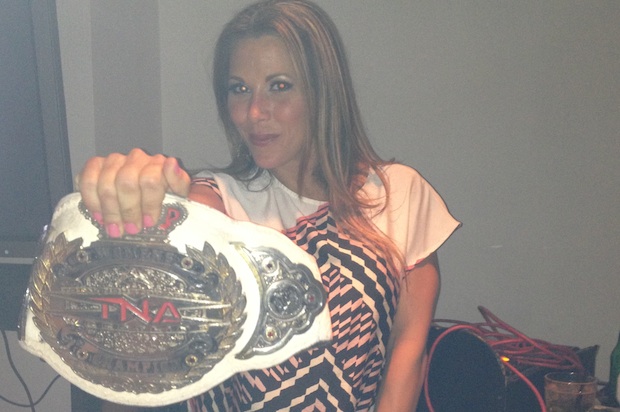 TNA Knockouts Champion Mickie James was in London, England, last night for an extra-special launch party to celebrate the release of her new album, Somebody’s Gonna Pay, and Diva Dirt was on the exclusive guest list for the event!

Mickie — currently in her third spell as Knockouts Champion and her record-breaking ninth title reign across WWE and TNA — was her usual bubbly, down-to-earth self, showing exactly why she’s been so popular with her fanbase throughout her career, and treated the select group of wrestling and country music fans in attendance to a Q&A session, where she talked in depth about her music career, the current state of TNA’s Knockouts division and much more.

Read below for some of the highlights from last night:

On filming the video for lead single “Somebody’s Gonna Pay” with Trish Stratus and Nick ‘Magnus’ Aldis: “I called Trish and said I was doing my music video, and I really wanted to bring some of the wrestling side to it… I thought it’d be really cool to have someone who was so influential at the start of my career to be a part of – this beginning, I guess – ’cause this is the first real release of a real album, you know, with the whole machine behind you. And she said yes ,so we flew her down and she hung out in Nashville. Nick did a fabulous job playing that awful boyfriend, and Trish was obviously a great bartender, because everyone was feeling right by the end of the night!”

On the writing process for the album, and whether she hopes to write more of her own music in the future: “It’s hard, because there are a lot of incredible songwriters who write songs all day long. I kind of write my own style – I’m more of a lyricist really. So I’ll hear a melody in my head and I’ll start to write with that. I mean, I’ve written whole songs but then I’ll go to a guitarist or a fellow writer who plays the guitar, and we’ll go back and re-write that song, so it just depends. I find I write my strongest when I’m working with somebody else who can sit there and play while I’m writing, and, you know, have some input in the thing as well.”

On the independent wrestler she’d like to see in TNA: “I’ve gone on record and will continue to go on record saying Serena – she’s one of the most talented people I’ve ever had the chance to step in the ring with. I’ve watched her from day one when she first stepped in the ring, she is technically one of the best wrestlers I’ve ever worked with.”

On the current state of Knockouts division and recent departures: “You’re always hopeful [about the division]. I mean obviously within any division there’s that revolving door, and it’s sad to see so many of the girls that I love with so much talent, you know, Madison and Tara [leave TNA]. Of course, everybody knows that Madison’s having a baby, she’s made that publicly clear. But you know, I feel like both of them are way too talented to not be doing something somewhere. I know that Tara recently tweeted a picture that she was getting ready for something; she’s as hard a worker as anybody else and she’s one of the most talented people I’ve ever had the chance to work with.”

On Taryn Terrell: “She’s come a long way, and I feel she’s really taken it to another level and come past that stereotype of just being the blonde model who learned how to wrestle – plus she’s a stuntwoman, so you have to be a little crazy for that!”

The Knockouts Champ was in town to celebrate the launch of her second album and rubbed shoulders with fans at the exclusive event at Grace Bar in London’s Piccadilly Circus.