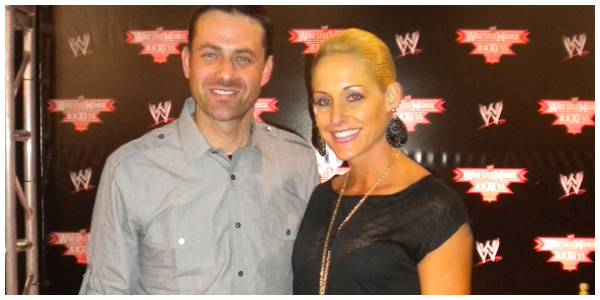 Diva Dirt correspondent and Beth Phoenix super fan, David aka Mr. Glamazon is on hand at this week’s WrestleMania festivities and will be checking in daily with his experiences in Phoenix. Check back everyday to find out which Divas he’s rubbed shoulders with in Phoenix — complete with exclusive pictures!

WWE Axxess continued on Friday, March 26th at the Phoenix Convention Center and most of the WWE Universe came to see the feature star of the night, the Undertaker. ‘Taker came out to his usual entrance and cut a 5 minute promo about the “Streak vs. Career” match and then turned around and walked (slowly) to the back. It was a little disappointing… all the other stars took questions from the fans and seemed to enjoy the interaction. Undertaker came out and did his usual routine and then left. Guess it was time to rest in peace. I will say the crowd was a split, there were plenty of HBK fans there chanting his name.

I wanted to add something I forgot to mention yesterday – during the Hart Dynasty vs. Cryme Tyme match at Axxess on Thursday, Natalya worked the crowd hard and played the heel perfectly. Everything from taunting the fans to threatening announcer Justin Roberts to selling the defeat, Natalya showed great energy and reminded everybody again that she is a solid worker with a great future. Kudos Nattie! (This was similar to a house show I attended with my family in November 2009… Natalya stole the show outside the ring).

Back to Friday’s Axxess, Michelle McCool, Mickie James, Vickie Guerrero, Katie Lea Burchill, and Jillian Hall made appearances. It was nice to see Mickie! She looked happy and healthy, although I guess the question still remains whether she can work on Sunday night (even though the program shows them on the card). Mickie fans should feel good, she looks to be on the road to recovery! My buddy and I were checking out Mickie’s legs quite a bit, strictly looking for signs of her surgery/recovery, umm… and for no other reason. OK, let’s just move on.

Vickie Guerrero had a long line of people waiting to meet her and get a signature. I love how people can hate a character on TV and then wait an hour to get a signature and photo with the star. That shows you how effective Vickie is on TV. She has created a character that people respond to, that people feel real animosity towards. You chat with Vickie for one minute and you quickly realize what a lovely woman she is and how she truly loves this business. Vickie said she would be open to giving Diva Dirt an interview in the near future. Cross your fingers!

My buddy and I met Katie Lea and were a little shocked how soft-spoken and shy she seemed to be. I love her on TV because I think she is a great worker (although WWE jobs her out every week… ugh!) and I kind of dig the goth/vampire vibe. The best part of Katie Lea’s appearance was when one of her fans gave her the WWE Women’s Championship belt to hold, she looked great holding the title and it made me a little sad we probably will never see that in “real life”.

The last Diva we met was the current Women’s Champion Michelle McCool. It is good she didn’t bring the title belt with her because I might have grabbed it (like Jillian Hall, God bless her) and refused to give it back until Beth wins it. (YES! There is my one mandatory Beth reference!) Good gracious, is Michelle put together. Very long, very lean, very striking. I found her engaging and when I mentioned I am associated with Diva Dirt, she said she loves the site and all we do for women’s wrestling. Yeah for us! Side note – my friend Jamie asked her if she defended her “longest drive” title at the WWE-Pro AM golf tournament on Friday and she said she got close but fell short. Sadly, this will be the only title she will defend this weekend. Sigh. (Update: she and Kane just appeared at Saturday’s Morning Madness session and she looked ravishing, although truthfully, I was a little, umm, ”tired and groggy” from the night before so it is possible I said hello to Kane and thought it was Michelle… who knows.)

A couple random funny thoughts from Axxess Friday: I think people should stop wearing 4-5 WWE championship belts at these events. Guys were walking around with belts hanging from the necks, arms, waist, heads, etc. I understand bringing one to get signed but these dudes wear these belts like they won them. Maybe I am the strange one here. Plenty of people were dressed up as the Undertaker which may or may not have had anything to do with them attending a wrestling event. Michelle saw one guy like this and kind of chuckled; can you imagine what she was really thinking?! She probably wanted to roll her eyes in the back of her head like the Deadman.

Rebecca Michaels made an appearance at the event Friday. She was with her family and seemed very gracious to the fans that said hello to her. I don’t know who is luckier in that marriage, her or Shawn. HBK! HBK! HBK! Time to tune up the band!

Lastly, I leave you with this story: I played the WrestleMania trivia challenge against a 9 year old and a 20 year old. The announcer read us the rules, I dug in, and thought “there is no freakin’ way I am losing this match!” So the announcer says: “OK, here is question…” and BAM – the 20 year old buzzes in! He buzzed in 3 straight questions before the question was even read! He ended up getting the questions right (yes, the guy then read the rest of the question to him) and the 9 year old walked away almost in tears that he didn’t get to ring the buzzer even once. I pulled the guy aside afterwards and scolded him for not letting the little kid at least play the game. I was not using friendly words because these events are for the kids, not for the adults to seem like know-it-alls. I almost Glam Slammed him but thought better of it, he wasn’t worth the trouble.

Random question: my buddy answered the following question correctly: “How old was Kelly Kelly when she made her in-ring debut?” Do you know?