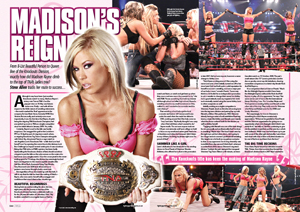 Diva Dirt‘s own Women of Wrestling Podcast co-host, Stew Allen has written a feature article on TNA Knockout, Madison Rayne in the latest issue of Fighting Spirit Magazine which is out now. The piece features quotes from Madison and covers the young Knockout’s rise to the top of the division. Stew has provided Diva Dirt with an exclusive preview of the article, which you can check out below:

From indy wrestler to SHIMMER Tag Team Champion to national exposure in TNA to becoming the champion of the Knockouts division in five years. Not bad. Madison Rayne’s rise from B-Lister to Queen Bee has surprised some observers, but not those who know her well.

“I always thought she had the potential to go high on the wrestling food chain however, I did not expect things to progress so quickly for her. I know how hard it can be to grow as an athlete on a high profile platform but she has handled it well and with grace. She has truly become the breakout star within the Beautiful People,” said Diva-Dirt.com’s own Allison Danger when reached for comment about the rise and rise of Rayne. The potential was there from day one, according to fellow Ohio wrestler Sassy Stephie, “Madison has always been determined to be successful in wrestling. I trained with her and we travelled together a few times, it was obvious she was going to make it to me and most people who knew her even at that early stage in her career.”

“Madison’s Reign,” a feature article in issue #56 of Fighting Spirit Magazine – The UK’s Biggest Wrestling Magazine – features a profile of Madison’s career to date, written by Women of Wrestling Podcast co-host Stew Allen, and is packed with info on one of TNA’s brightest stars, along with quotes from both SHIMMER promoter Dave Prazak, and from Madison Rayne herself. Read in her own words how she got started in the business, her thoughts on her tag team in SHIMMER with Nevaeh, getting into TNA, thoughts on Velvet & Lacey and her plans for the future.

Read the first couple of paragraphs here, and then pick up the full article at your local WH Smith or other good retailers. US residents should be able to pick up a copy at their local Borders or Barnes & Noble.