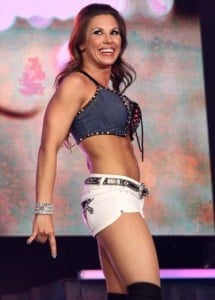 Over the past few months, Mickie has battled a rib injury that kept her out of in-ring competition, and recently had surgery to remove — she discusses for the first time — a benign tumor.

Since overcoming the health scare and returning to what she does best, Mickie tells Diva Dirt exclusively she’s feeling better than ever and ready to get into the ring with recent rival, Tara, at TNA’s Final Resolution pay per view this Sunday (December 9).

In an interview with Diva Dirt — which will be released in full tomorrow — she reveals: “I feel fantastic.

“I feel like God sometimes intervenes when you’re pushing yourself really, really hard. If you won’t give yourself a break, sometimes it just happens for you.”

Speaking about her surgery, which she first discussed on Twitter in October without disclosing the nature of the medical issue, Mickie adds: “It was pretty scary. I didn’t get into a whole big ordeal as far as my surgery went because it was so scary and very personal, and kind of humbling in a sense.

“In this industry, we’re so accustomed to fighting off pain or negating it, and working through it, sometimes we don’t take little things very seriously.

“Most times when we think of getting hurt or having to go to the hospital, it’s usually for to do with an injury in the ring, so for it to be for something personal and to have this mass… and thank God it was benign.”

However, the eight-time champion is back to her kick-ass self, with thanks to a strong support system.

She said: “My family took amazing care of me, and my friends and my loved ones. They just bent over backwards. It was reassuring, because you forget about that and take that stuff for granted.”

Check back tomorrow for the full audio interview with Mickie.

Catch Mickie in action against Tara at Sunday’s Final Resolution pay per view at 8pm ET.