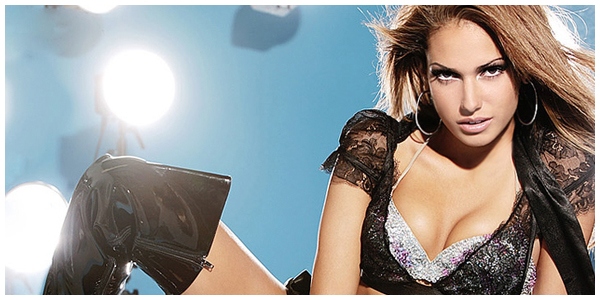 Allow us to officially introduce you to wrestling’s newest siren: Reby Sky. This 23-year-old bombshell is best known for her work as a model — credits include Playboy — but she’s also a huge sports fan, particularly pro wrestling. Reby has already dabbled in the industry, co-hosting Sirius XM’s Busted Open every Wednesday, but tomorrow night she begins a new journey as backstage interviewer and commentator for MTV2’s Lucha Libre USA: Masked Warriors.

With the premiere of the new series just 24 hours away, we caught up with Reby — who, quite wisely, is a fan of Diva Dirt *cough* — to get all the scoop on her exciting new role! Read all about it below…

How did you get involved in Lucha Libre USA: Masked Warriors?
I was covering an indy wrestling convention in New York and got the chance to interview Marco Corleone (Mark Jindrak of WCW, WWE). In the interview he told me about his experience wrestling in Mexico and gave me the scoop on his newest project: a lucha libre show for MTV2. A few weeks later, I got an email from a producer over at MTV asking me to fly in for an on-camera tryout, saying Marco had recommended me for the show. Needless to say, I was shocked! I actually cancelled an already booked trip to Paris for the tryout and thank goodness I did, because I’m so excited to be on board for this show!

What is your role on the show?
I’m a backstage interviewer and color commentator for the matches.

In your own words, as a fellow wrestling fan, what can we look forward to with this show?
Definitely a different pace of action. It’s nice to see more than just a little tease of the high-flying lucha libre style for a change. The guys genuinely have a passion for the business and that comes through in their matches. I follow a lot of wrestling and have never seen some of the things these guys can do. With rudos, technicos, chicastars, minis and everything in between (exoticos!), there’s something for everyone to enjoy and plenty of surprises to keep you glued to your TV.

We know that Awesome Kong and Rhaka Khan will be part of the series. What can we expect from them and what was it like working with them?
Man, you guys really do know everything! It was such an honor working with both ladies. I’ve always been a huge Awesome Kong fan and Trenesha (aka Rhaka Khan, now Tigresa Caliente) is amazing both on the mic and in the ring. They’ve both got a really solid work ethic so it was awesome being able to learn from them in the locker room.

How long have you been a wrestling fan and what got you hooked?
I’ve been a fan since ’97, when a friend of mine brought me along to a Raw show in New York. At the time, I didn’t know much about wrestling, but after the show, I was hooked. Being a 12 year old girl, the storylines are what really got me at first, which is part of what I miss about the Attitude Era… the really juicy stuff.

What products do you watch at the moment? (WWE, TNA, ROH etc.)
All of the above! If I’m not working, I’m training and if I’m not training, I’m watching wrestling… it’s become my entire life. I only got into ROH in the past year or so, although I’ve been watching WWE and TNA for years.

Who are some of your favourite female wrestlers?
Gail Kim is my absolute favorite. She moves like she’s weightless in the ring but she’s so tough, it’s amazing to watch. I wish we saw more of her nowadays.

Have you any aspirations to step into the ring yourself?
I would love to… I’m training right now, so who knows!

Any other wrestling projects we can look forward to seeing you in?
I’ll be working as a manager in a few indy shows with CTWE (Connecticut Wrestling Entertainment) and you can hear me every Wednesday from 2-4pm ET on Sirius XM satellite radio on the pro wrestling show, ‘Busted Open’ (Sirius 125/XM 241).

Finally, where can our readers follow you?
Big news is always on my website, RebySky.com first or you can follow me on Facebook and Twitter. On air: ‘Busted Open’, Sirius 125/XM 241 every Wednesday from 2-4pm ET. I love callers, so feel free to call in and talk wrestling with me at 866-522-2846! Don’t forget to check out the premiere of Lucha Libre USA: Masked Warriors on MTV2 at 10pm ET and catch the show every week on MTV2 & MTVTr3s.

Check out some pictures of Reby from the show below: