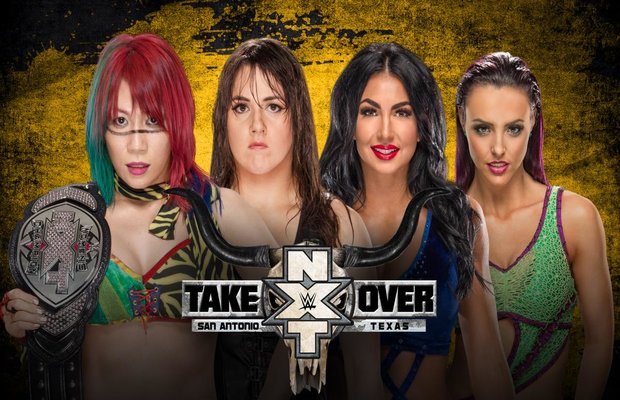 WWE is confirming that Asuka will defend her title later this month against Billie Kay, Peyton Royce, and Nikki Cross.

The decision to make this match comes after a brutal attack last night by the Iconic Duo. Nikki also staked her claim for the title, first rescuing Asuka from the Aussies and then attacking Asuka immediately following the save.

Asuka demanded a match from William Regal against “all of them.” Now she’s got it.

WWE.com had this to say about the upcoming bout:

Since her arrival at NXT, The Empress of Tomorrow has been unbeatable, recently passing Paige as the longest reigning NXT Women’s Champion ever. There have been questions about which NXT competitor could present a worthy challenge for Asuka’s title. Well, we now know that it’s not one, but three Superstars who are up for the task.

Since the first Superstar to claim a pinfall wins the contest and becomes NXT Women’s Champion, Asuka finds herself at a severe disadvantage in this title contest. Not only does the champion have to compete against three challengers, but she doesn’t even have to be involved in the fall to lose her title. As a result, the spirited champion’s record-breaking title reign will be in serious jeopardy in the Lone Star State.

Are you excited for this match? Who do you think will win? Sound off in the comments below.