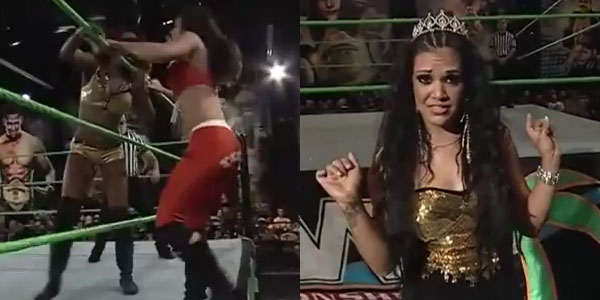 Greetings everybody, and welcome to your (now seemingly) weekly FCW Watch. We’ve been on a string of matches given to us by the developmental gods, and this week proves to be no different as Audrey Marie puts her Divas Championship at stake against challenger, Caylee Turner! In addition to that, Raquel Diaz also makes a declaration, as General Manager, Maxine, visits the local therapist, James Bronson. Now without any more blabbing, let us get started with this week’s edition of Florida Campeonato Lucha!~ (Note: my spanish may be a bit rusty)

We head to the ring for the start of the show, as Danielle Moinet introduces the following contest to be for the FCW Divas Title. Some particularly funky, spunky ring music hits, and out walks Caylee Turner, who masters the art of posing throughout her entrance. She proceeds to bounce around inside the ring, as she removes her coat and gets ready for her championship battle! Up next comes the lady of the evening herself, Audrey Marie, who displays her title proudly as she enters the ring. Following the removal of her coveted vest and chaps to reveal her red and white gear displaying her love of Texas, the bell sounds and we start this match off.

They circle around the ring, before locking up, as Caylee shoves Audrey back. They trade advantage a bit, before breaking the hold. Both divas proceed to run off separate sides of the ring, as Turner leaps down and Audrey hops over. Turner flips over onto her back to try to trip Audrey up, but the Divas Champion again manages to avoid a collision. Caylee kips up, as the two stare off with each other to a pop from the crowd. Turner with a kick to the stomach, as she sends Audrey into the corner. Marie leaps off the second rope with a springboard crossbody for a near fall, before Caylee capitalizes with a shoulder block. She flips herself over into a jacknife pin, but Audrey climbs out of it and transitions into a backslide, however Caylee manages to avoid her shoulders touching the canvas so the referee makes no count.

Audrey with some punches to the face, before Caylee shoves her off and holds the ropes down which causes the Divas Champ to fly onto the ring apron. They trade shots until Audrey goes for a springboard move that ends up costing her when Caylee shoves her off to the outside in mid air. Turner shoves Audrey back into the ring and levels her with a kick to the back for a two count. From there, she begins to wrench on the shoulders of the Champion, whilst the crowd starts to get behind her! Caylee with a kick, before tossing her backwards for a one count. Drop of the elbow follows, before nailing a nice leg drop! She hooks the leg for a two count, which seems to frustrate her as she lets out a screech that for some reason made me laugh and have to replay a few times.

She begins to taunt Audrey as Caylee applies a leg choke to the ring ropes, before slamming her face down to the canvas and applying a choke hold. Turner decides to go for the leg drop again, but Audrey slides out of the way and drops the challenger with a clothesline/back elbow combo. She sends Caylee off the ropes, as Turner goes for a handspring bulldog that we’ve seen in the past…only Audrey decides to say “no ma’am”, and simply splashes her down face first into the canvas. From there, Caylee goes for a clothesline, but Marie ducks and transitions it into the Round-Up! One…Two…Three! Audrey retains her Championship, despite a valiant effort from Caylee Turner.

We proceed over to the current reigning Queen of FCW, Raquel Diaz, who dubs the FCW Universe as her loyal subjects. She asks how they’re doing, before coming to the revelation that she doesn’t care because she’s the Queen! Diaz claims that this means everything revolves around her, but that does not include our “Yippee-Kay-Ay” Divas Champion, Audrey Marie. She gives Audrey a message that morals and being a good girl only get you so far in life…and apparently it’s only gotten her out of Texas. (I laughed) She beckons that the hall of FCW is beautiful, but that it’s missing a banner of the FCW Divas Champion. Raquel claims that she’s going to look so good for all eyes to see, before telling Audrey to say bye to her Championship since it will be hers very soon, much like all of the accolades and pride. With that, our Queen heads out of the arena, and we head to a break.

Backstage, Maxine can be spotted laying down on a couch saying how glad she is that she came today, as newfound therapist, James Bronson tells her to relax. He begins with her job and asks her to tell him what’s going on there. Maxine claims that she’s still the General Manager of FCW and she has to deal with a bunch of nimrods running around her. Not only that, but every week she has to go on NXT and deal with Derrick Bateman and Johnny Curtis! She demands that everyone expects so much out of her and she’s tired of carrying everyone elses weight and it causes her stress. She apologizes for going off on a tangent, as James claims he is out of time for this weeks session. Maxine gets up and heads out of the equation, which leaves James alone with Maxine’s forgotten purse. He scarily looks at it and grabs it, before turning around and doing god only knows. He tosses the purse back, as Maxine walks back in to grab it, which sparks him to turn around and be got applying her makeup?! If Maxine didn’t have enough stress now, I’m sure she just got some added from this.

Thoughts: Starting off with the match, I actually really enjoyed it! I thought Caylee looked the best in ring she ever has, and Audrey more than held her own as well. You can tell they are improving to a level higher, and being given a nice time to wrestle every week seems to be helping. They had some nice moves that I was surprised to see, and I thought the ending transition from Caylee’s failed bulldog into the Round-Up came off top notch. Hopefully these two meet again when they have improved to an even higher level because they really seemed to click in the ring for me.

Raquel’s promo was fun as well. She reminds me of an evil queen from a fairy tale, especially now that she has the crown to complete the look, and I kind of like it. She stands out from everyone else, and I replayed the part about Audrey and Texas probably more times than I should have. I’m excited to see her get some extra ring time soon because I think holding the Queen of FCW crown will definitely help her to improve since she will be used more in a wrestling capacity…however, she does well with promos so I’m not complaining getting to see her do them.