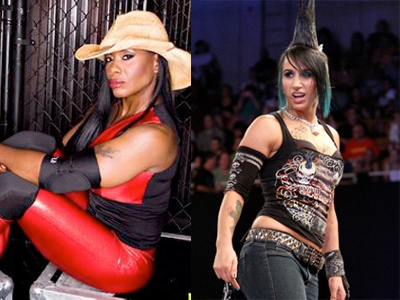 TNA has officially removed Jackie Moore and Toxxin from its online roster page.

Veteran WWE and TNA star Jackie revealed last year that her contract was set to expire, and that she didn’t expect it to be renewed as she hadn’t heard from TNA. Prior to her departure, Jackie hadn’t been used on TV for some months.

Meanwhile, Toxxin, better known as Christina Von Eerie, hasn’t been seen in recent months either. Her real life boyfriend, Jesse Neal, left TNA last year, so it looks as though TNA has parted ways with both Neal and Von Eerie. Neal recently stated that Christina was not under a contract and didn’t know if TNA had any future plans for her.

Toxxin debuted in October prior to the Bound for Glory pay per view and made a few appearances before disappearing from television. Jackie returned with ODB last summer as outsiders in a feud with Velvet Sky. The pair were placed in a storyline where they tried to earn contracts to become full-fledged Knockouts once again. They succeeded, but ironically, Jackie wasn’t seen on TV again after ‘earning her contract’.