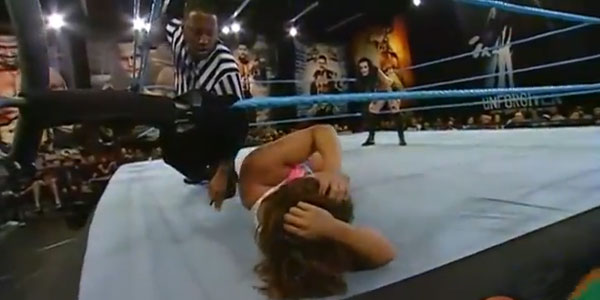 Hello everybody, and let me first apologize for the lateness of the FCW Watch this week. Truth be told, I actually forgot about it in the midst of Raw and NXT this week, but never fear, for I am here with the second to last one you will ever see on this site. This week, Paige squares off against Audrey Marie in what’s sure to be a match so good it will make you want to pull your hair out from being on the edge of your seat!~ In addition to that, Summer Rae also makes her presence felt when she discusses the “Summer” Slamarama tour and reintroduces Leakee to our viewing pleasure. Alright, let’s get started with this recap so that I no longer feel guilty about forgetting this all week!

Out first comes Paige, who never fails to impress when she’s in the ring. She steps into the ring and brilliantly tries to hand her coat off to Sofia, but then remembers that the two are now in splitsville. Up next hits the theme that could make a depressed person get up and dance, in that of Cotton Candy gear clad, Audrey Marie. Audrey hops around, you know, since she’s the queen of the jump rope, before stepping into the ring and getting ready for the match at hand. The bell sounds as Audrey takes Paige down quick with a side headlock takeover. Paige tries to counter into a roll up, before fighting out and getting taken back down with a modified hip toss.

The two roll around a little, before Audrey fights back until ultimately being taken down with a jacknife for a near fall. Marie bridges out and hits a Russian Leg Sweep for a close call, as Paige then takes control and drops Audrey throat first onto the top rope. The Norwich Born Anti-Diva keeps control of the match with a huge super kick to the face. She then locks in a choke hold with some screams that would make Kelly Kelly cower in fear. Paige hits a headbutt and a bodyslam, as she just continues to dominate the contest. Another submission or two as we end up with Audrey in a Bow & Arrow until she rolls over into a pinning combination for a two count.

Paige rolls through again though, but just a one count. Suddenly, it appears that Paige’s hair extension has fallen out of her head. Being the Anti-Diva though, she doesn’t let it affect her and simply continues on with a suplex for a near fall. Paige continues to work Audrey over with that dangling extension from her head, which seems to just infuriate the Brit even more as she becomes relentless in these attacks to Audrey. She tries to fight away, but Paige continues to brutally assault her to the point where the referee gets screamed at and makes a five count, thus disqualifying Paige! Paige finally just rips the extension out of her head, as she continues the assault on our Texan native.

Also, check out FCW General Manager, Summer Rae, as she entices us by denoting how the Summer Slamarama tour got its name (take a guess), and introduces the return of Leakee:

Thoughts: The match between Paige and Audrey was pretty awesome. It was mostly Paige in control, but it wasn’t short and really kept me on the edge of my seat. This aggressive style to Paige is how I feel she fits best in, just going all out hardcore in dismantling her “Diva” opponents. I really wish she would’ve been the one to get focus on NXT because if she got a video package where she explained the Anti-Diva movement, I would’ve probably died and gone to heaven. Audrey plays the victim role so well (although those screams kill my eardrums at times), and I know a lot of people don’t care for her/feel she’s too similar to a certain Knockout, but I like Audrey and always have. I’ve said it before, but I think she’s improved so much since her debut. Maybe because I remember how new she was on her debut and how she could barely even do a move back then to where she is now. I wish she got more credit from fans because I personally don’t feel she’s near as bad as people make her out to be. I just think her “Mickie-esque” look is a detractor and people just notice that more than her performances in ring. Don’t get me wrong, she still has a ways to go, and I know everyone is entitled to their opinion. I just personally feel she’s probably one of the more underrated Divas in terms of fan perspective. But nonetheless, I’ll enjoy the last week of Diva action next week, and hopefully they go out with a bang.