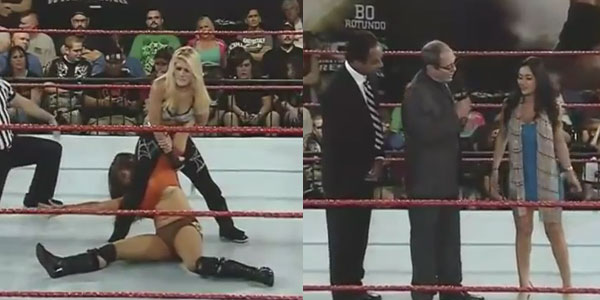 Welcome everyone to another exciting edition of the FCW Watch! Last week was an off week for the ladies of the developmental territory, but let’s see if we can get things back up to speed when eliminating the wretched triple threat stipulation by just putting Sofia Cortez one on one with Audrey Marie. Now that doesn’t mean we won’t be treated to some appearances by Kaitlyn, Paige, and FCW Divas Champion & Queen, Raquel Diaz, but at least those don’t take place during the match. In other news, Maxine is also summoned to the ring for some important news regarding her future in FCW as their General Manager! Now let’s get started…

We head out to the ring where our coveted announcer, Caylee Turner informs us of the following Divas bout. Out comes Tough Enough standout turned kick butt FCW Diva, Sofia Cortez, looking as great as ever as she steps into the ring and prepares for her first singles match on the show. Some spunky music then interrupts, and out walks our cowgirl (although looking more like Lara Croft tonight), Audrey Marie! Audrey walks down the stage and climbs into the ring as the bell sounds and we get ready for this action.

The two lock up a few times, as Sofia shoves Audrey back and kicks her in the shoulder. A wrist lock follows, but Audrey kips up and sweeps Sofia by the legs for a near fall. Both race to get up again, and this time Sofia trips Marie for a close count. Audrey quickly hits an arm drag, following it up with a hip toss and another arm drag that sends Sofia out to the ring apron. Marie removes her holster and punches Sofia, albeit not off the ring like I’m sure she wanted. Audrey tries to grab hold of Sofia’s hair, but Cortez blocks and drops Audrey by the arm off the top rope!

Sofia hops back in and begins attacking the arm with some kicks. Cortez goes to work on Audrey’s injured arm with a submission hold, which she transitions into a pretty awesome, yet sick leg choke on top of it. Audrey struggles, but finally manages to counter it into a roll up for a two count. Both women get up, as Cortez kicks Audrey in the shoulder and proceeds to drop her with an amazing “eat defeat” like move, only her leg is focused on the injured arm and not the chin like when Gail Kim performs it. Cortez covers, but only gets a near fall, and from there begins pounding away at Audrey. Sofia picks Marie up, but Audrey starts to build a comeback with some punches to the face. She is sent off the ropes and both women connect with a double facebuster!

Each lady remains down until they are able to get to a vertical base, in which Audrey connects with an elbow drop/clothesline combo! Sofia goes for a clothesline, but Marie matrixes back and connects with her awesome spinning headscissors. She charges towards Sofia in the corner, but Cortez blasts her in the face with an elbow, following it up with a jawbreaker for a two count. Sofia wraps Audrey’s arm behind her back and throws her into the corner a few times, but Marie manages to counter a submission attempt into a roll up for a near fall. They both get back up as Cortez goes for a clothesline that Audrey ducks, and proceeds to run off the ropes. She goes for a crossbody, but Audrey catches her and drops her with a swinging side slam for the win!

Audrey tries to celebrate her win, but it’s quickly cut off as both Raquel Diaz and “the enchanting raven haired lady”, Paige, walk out onto the scene. Audrey walks over to the corner where both stand, which allows Sofia to slide over and grab hold of Audrey’s feet! Marie remains trapped, as Paige and Raquel hop up to the ring and begin blasting her with shots. This punishment continues on until Kaitlyn runs out and pulls Raquel off the ring apron to the floor! She then slides inside and hits a dropkick on Paige that makes even me hurt from how sensational it looked. Sofia, Paige, and Raquel walk up the entrance ramp in anger, as Kaitlyn and Audrey celebrate the latter’s victory.

Out to the ring we go, where Norman Smiley and the FCW President, Steve Keirn walk out to a rousing applause. Keirn thanks everyone who attends any even they hold, for without them they wouldn’t have anyone to perform with and that would be tough to do. Steve announces that he wants to get to the big news, before beckoning our General Manager, Maxine, to get out to the ring so he can tell it. Suddenly, IF YOU WANT IT COME & GET IT blares into my ears like the club hit that it is, and the elegant Maxine steps out from the back. She climbs up the steps and into the ring, as Steve congratulates her on all of her success since she became the FCW General Manager a year and a half ago.

He adds that some things have come to his attention, in that she hired a psychiatrist for the entire FCW roster to tell their secrets to. Maxine informs Steve that she was told to do that by all of them, but Steve interrupts and tells her that while that may be true, James Bronson is no psychiatrist. Maxine states that she hired him because SHE needed to know everything about the roster, presumably which she could not do by hiring just any old doctor off the streets of Tampa. Steve lets her know that FCW doesn’t revolve around Maxine, and that going forward, he wants her to turn over all of the notes and personal items she has to Norman Smiley.

He continues, but Norman interrupts him and wants to do the honor himself! From there, Norman takes to the mic and lets Maxine know she is FIRED! Smiley does a little jig in the ring, as both men leave and Maxine is left standing stunned in the ring. She doesn’t seem to be too upset though, with a little smirk on her face following the big news as she heads to the back and our segment comes to a close.

Thoughts: I thought Sofia and Audrey put on a much, much better match than last week for sure. They meshed well together, and while there were a few little things to pick on, that’s to be expected with anyone who is still relatively new to wrestling like Audrey is. I think she is coming along great, and working with someone like Sofia will only help her to improve. Speaking of which, Sofia is really coming into her own in this roster full of personalities and I love it. She can play the comical heel as shown when she and Raquel faced Audrey and Kaitlyn, or she can be the dominating serious one as displayed here. I think she could really be something great for the division on TV, and I can’t wait to see how both of these women are doing come the end of 2012.

Maxine’s segment was also interesting, as it seems to me that she is leaving FCW for good to become a full time member of the mainstream roster. While I’m personally glad for her since she shines every week on NXT, I’m bummed that I won’t get to cover more of her stuff for FCW as well. I think we still have one or two weeks of segments involving her left, but after that I’m not quite sure since the next TV Taping is actually this week. We’ll just have to wait and see!