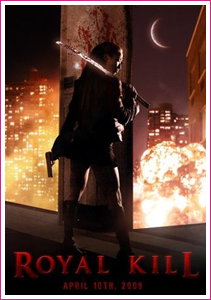 Wrestlers don’t usually have a good track record when it comes to appearing in movies (*cough* Blade Trinity *cough* anyJohnCenamovie *cough*) but Gail Kim‘s giving it a go in “Royal Kill”, a movie that’s been on the shelf for a while now (to give you a taste of how long it’s been, its star died in 2005) but its finally ramping up for a limited theatrical release. According to its IMDB page, this is the synopsis:

A high school teenage girl in America finds out that she is the last living heir to the Kingdom of Samarza. An assassin (note – that’s Gail) has been sent to kill the young princess while a noble guard has been sent to protect her.

Seems like your typical action fare, but I’m willing to give it a shot. It can’t be worse than the films that the WWE produces. Appearing alongside Gail in the movie is Eric Roberts (“The Pope of Greenwich Village”, “The Dark Knight”) and the late Pat Morita (the “Karate Kid” films). So far it’s only being released in limited locations in California, Chicago, and Virginia. I suppose that’s better than going straight-to-DVD, but I doubt it’ll be getting any wider of a release, so most of us will have to wait until it graces the shelves of our local video stores to see how Gail fares.

Until then, check out the first image of her in the film by clicking the thumbnail below. In addition, the film’s website has the official trailer, so click here to watch.