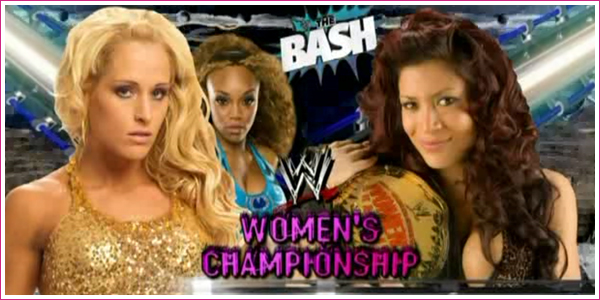 So this is what the parting of the red sea must feel like. Though not officially announced, the Wrestling Observer has announced that a Women’s Championship match is expected to take place at The Bash pay per view on June 28th.

The Bash will be the first Divas pay per view match since January [WrestleMania doesn’t count], as Melina defends the Women’s Championship against Michelle McCool. Ironically, it was in the last Divas PPV match that Melina won the title against Beth Phoenix at the Royal Rumble.

It’s been a long drought folks, but our patience has paid off!And what a doozy is our first pay per view match back, I am totally checking for Melina and Michelle. As I revealed in my audio bulletin earlier this week, I was feeling confident that the Divas would get onto this pay per view card as WWE seem to be in a mad rush to book the event, as they haven’t left themselves much time in between the Extreme Rules pay per view and this one. Usually that leads to sloppy booking, but it works well for our Divas who this year have been disregarded from PPV events. I really hope Melina and Michelle get a good 10 minutes to slug it out, their work thus far has been great.

EDIT: As you can see from the image above, the match is now official and was announced on this week’s SmackDown.